Eagle Watch! Platteville Pair Have Nest-Prepped and Eggs Are Coming!

Eagle Watch! Platteville Pair Have Nest-Prepped and Eggs Are Coming!

Last year, the first egg was laid on February 13, so watch the cams closely!

'Tis the season for bird babies! Xcel Energy is once again giving us all a rare opportunity to have a birds-eye view of eagle breeding season, from egg-laying to eaglet fledging.

A longtime-resident pair of eagles have been prepping their nest for months, and eggs are expected at almost any time. You can watch the nest 24/7 to get a glimpse into the life of an eagle.

"We have one eagle nest equipped with two video cameras, so you can watch the American bald eagles build their nest, lay and incubate their eggs, and raise their young in late January through July," says Xcel Energy.

The eagles are located at the Xcel Energy Fort St. Vrain Station in Platteville, and pairs have been faithfully coming back to the same spot to lay, hatch, and raise their brood for years. According to Xcel, the pair's nest, or aerie, is six-feet wide by five-feet deep and is high up in a cottonwood tree. The cameras were installed in 2003 to catch the natural miracle, but the eagles had been settling there long before that. To date, more than 40 eaglets have hatched at this location. 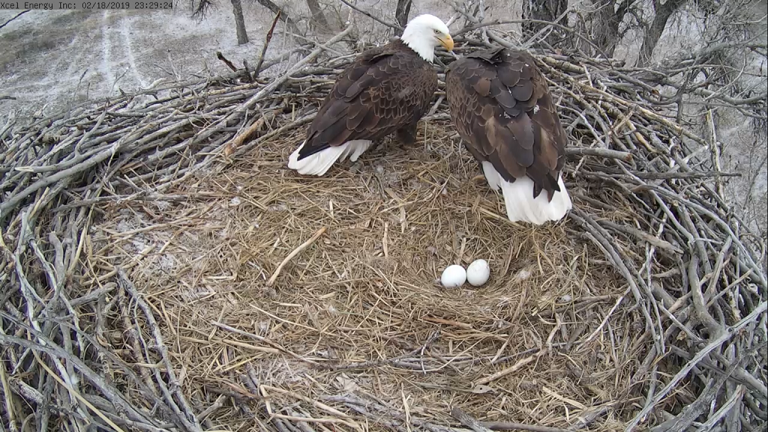 In 2019, the eagle pair had laid two eggs by February 18. When do you think they will lay their first egg this year? Courtesy of Xcel Energy (Facebook).

"Last year, they laid their first egg on February 13 with two more following within a week. From the time the eggs hatch in March (the incubation period is typically 35 days) to fledging in June/July, viewers will have plenty of opportunities to watch the eaglets grow. Last year, two of the three eggs hatched and the two eaglets both fledged from the nest," says Xcel.

You can watch the eagles live as their journey unfolds in two different places: the RaptorResource.org website and the Xcel Energy Eagle Cams,

Have you watched this nest before via the live stream? When do you think the eggs will arrive (perhaps Valentine's Day)? Let us know in the comments below!