Extreme Heat Heading to the DMV Region This Weekend

Extreme Heat Heading to the DMV Region This Weekend

Temperatures in excess of 100 degrees will leave the region sweltering.

The National Weather Service says heat moving in from the midwest combined with remnants of tropical storm Barry will bring extreme heat to Maryland, Virginia, and D.C. Temperatures will begin to surge starting on Wednesday, reaching up to 100 degrees through the weekend. The combination of heat and humidity could be dangerous, especially for small children and the elderly.

A Hazardous Weather Outlook has been issued for Maryland, Northern Virginia, and the District of Columbia, from July 16 through Monday, July 22. Temperatures in the region will begin to creep up on Wednesday, reaching into the 100s over the weekend. The extreme temperatures are the result of a heat dome, an atmospheric condition trapping heat and humidity in the mid-Atlantic region. Look for temperatures in the mid-90s on Wednesday and Thursday along with the chance of thunderstorms and localized flooding. 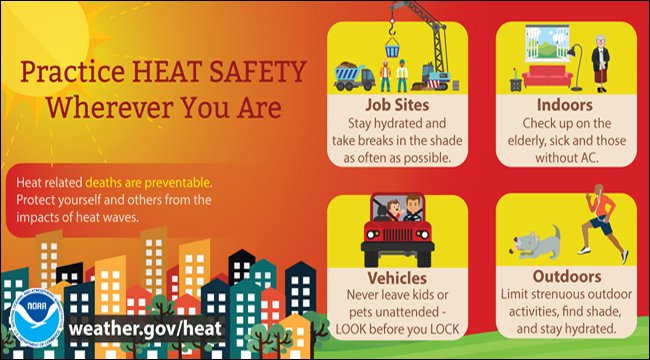 On the weekend, you can expect temperatures in the high 90s with a chance of storms on Sunday. The high humidity could make temperatures feel more like 110 to 115 degrees. Temperatures are only expected to drop into the 80s and 90s at night. Saturday will be the hottest with a high of 98 and a peak heat index of 112 degrees. Early next week, temperatures are expected to retreat to the low 90s as the possibility for storms return.

Officials are warning people to take precautions before venturing out into the heat. Always bring water, wear light-colored clothing, and limit strenuous exercise in the heat. Bring pets indoors, and check on elderly neighbors and people without air conditioning. Visit city and county websites for the locations of cooling centers. If you or someone you know needs transportation to a local cooling center, call D.C.’s emergency hypothermia line at (202) 399-7093.

What do you plan to do this weekend to stay out of the heat? Leave a comment and let us know!