The cause of the accident remains a mystery.

In a horrible accident Tuesday, December 29, Erik Mezick's delivery truck crashed off of the Chesapeake Bay Bridge-Tunnel and plunged into the water below. After an exhaustive search by authorities, Mezick's body was never found. Family and friends are continuing the effort in the hopes of finding closure and are reaching out to the community at large for help.

The official search was called off on December 30, but the family has never wavered in their dedication to finding Mezick's remains. Erik's brother, Kevin, and other family and friends have continued their own search in the days since and plan to continue until Erik is found. Kevin started the Facebook page Finding Erik Mezick to keep the public informed on their search and to "ask for anyone that is on the water this time of year to keep a close eye out."

Time is of the essence

The family announced Tuesday afternoon, a week after the accident that a fundraiser has been started by Doug Marshall and other "generous donors" to offer a reward of $10,000 to anyone who is able to find Mezick's body. "Time is of the essence" the Facebook page reads, and the family is hopeful that involving as many people as possible will hasten the closure they are longing for.

Last Thursday, December 31, two days after the accident, a door to Mezick's delivery truck was found on the beach in Sandbridge, the southernmost shores of Virginia Beach. On the morning of Tuesday, January 5, some debris and panels also from the box truck were discovered at the point of First Landing state park, as far north as you can go on the beach (not counting the military base Fort Story). 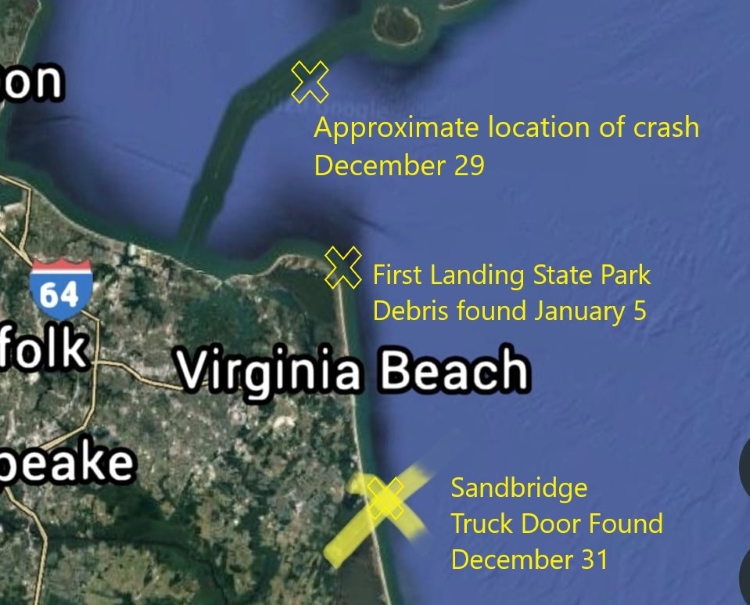 The morning of Tuesday, December 29

Erik Mezick (47) of Fruitland, Maryland was returning home Tuesday morning after a delivery for the Baltimore-based Cloverland Greenspring Dairy. Mezick's route entailed deliveries for Cape Charles and Virginia Beach. In an interview with 13News Now, his brother Kevin said it was a 130-mile trip he made weekly since getting the job in March after retiring as a correctional officer.

At 8:20 a.m., the truck Mezick was driving went over the guard-rail on the east side of the CBBT's northbound lanes. It was about three-quarters of the way down the structure from the Virginia Beach end near Mile Marker 14. Witnesses told the Coast Guard that they saw a man exit the truck, although it is unclear if he fell or climbed out. Mezick then began drifting west in the bay. According to his brother, Erik was a strong swimmer and “swam every day, 100 laps a day.”

On the day of the accident, there were “about 130 miles of search area across 11 different searches and over 16 hours,” Captain Samson Stevens, Port Sector Commander for Sector Virginia, said in a statement. The Coast Guard was working in conjunction with the Virginia Port Authority's Maritime Incident Response team, Virginia Resources Commission, Virginia Beach Police, Fire, EMS, and the Chesapeake Bay Bridge-Tunnel Police. They all worked until dark on Tuesday and resumed the operation the following morning.

The afternoon of Wednesday, December 30

Around noon on Wednesday, Crofton Diving of Portsmouth, Virginia was able to pull the truck out of the water using a large crane. Two hours later after an additional seven hours of searching and a total of 178 square miles covered, the operation was finally suspended without Erik Mezick being found.

Authorities are still investigating what could have caused the accident and hope to gain more information from the recovered truck.

Although wind gusts are always a potential threat for trucks traveling over the structure, the weather on the day of the accident was not particularly alarming. The wind restrictions on the CBBT do not take effect until there are sustained winds of 40 mph. That morning, gusts got up to 30 mph but Cody Poche, a meteorologist with the National Weather Service in Wakefield, said that is “fairly common in the winter here” when speaking with the Virginian-Pilot.

There is also a fundraiser that has been set up for the Mezick family on GiveSendGo. Julie Duncan, the campaign creator posts: “It is within this time that friends and family can help in many ways, but we ask for donations to alleviate some of the financial burden that is around the corner. Your gifts will hopefully lift the weight from this family and allow them to spend time healing and focusing on what matters.”

Did you know about 15 over-the-side crashes have occurred on the Chesapeake Bay Bridge-Tunnel since 1984? Anything you would like to say to the family or the rescue workers that conducted the search? Share in the comments below.