The Frederick Douglass Memorial Bridge is now open in the District of Columbia. The new bridge replaces a 70-year-old structure that connects Wards six and eight, home to the bridge’s namesake, abolitionist leader Frederick Douglas.

To celebrate the completion of the bridge, the city held a 5K run and a ribbon-cutting by local and federal leaders, including Mayor Muriel Bowser, Congresswoman Eleanor Holmes Norton, and House Majority Leader Steny Hoyer.

Descendants of Frederick Douglass himself were also on hand for the occasion. 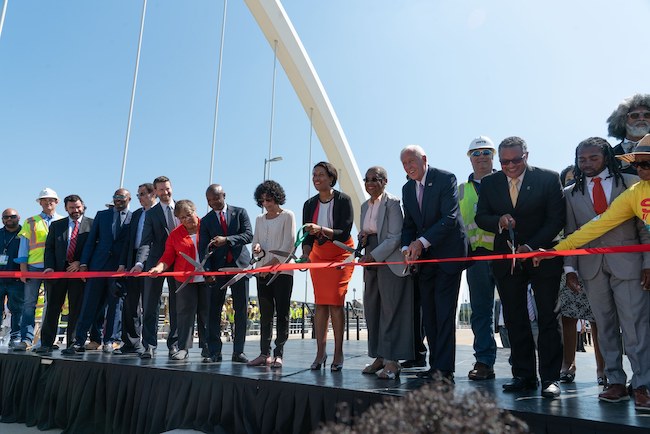 The new bridge is part of the South Capitol Street Corridor Project and was completed nearly one month ahead of schedule. Spanning the Anacostia River, the new bridge has six lanes of traffic instead of four and wide pedestrian walkways that will ensure a more efficient route for the 70,000 commuters that cross each day. The triple arch design makes it look like the bridge is floating on the water.

The $440-million project also includes the reconstruction of the aging Suitland Pkwy./I-295 interchange along with traffic ovals connecting South Capitol St. to Potomac Ave. and Q St. SW and South Capitol St. to Suitland Pkwy and Howard Rd.SE. The phase of the project is scheduled to begin next spring. At least 60% of the funds required to build the bridge came from the federal government with local D.C. taxpayers picking up the rest of the tab. The bridge is integral in connecting D.C. wards 7 and 8 to the rest of the city.

The Frederick Douglass Memorial Bridge was christened over the Labor Day holiday and finally opened up to vehicular traffic on Friday, September 10. Residents and commuters can expect traffic delays as work continues on the interchanges next to the bridge.