The Hampton Inn has been shutdown by Prince George's county health officials.

A hotel located in National Harbor has reportedly been shuttered by Prince George’s County for unsafe practices during a pandemic. The 151-room hotel has a sign on the door that says it is closed until further notice “to protect public health and safety."

The entire National Harbor area has been a thorn in the side of Prince George’s County officials all summer. The area was invaded by large groups of kids, resulting in fights, thefts, and nuisances for businesses in the area. There were also reports of parents renting out hotel rooms for kids to have giant parties that were largely unsupervised.

County Executive Angela Alsobrooks created a COVID-19 ambassador compliance team to create a plan to deal with the chaos at the National Harbor.

“We do not want parents first of all to rent hotel rooms for children,” said Alsobrooks. “And to leave those children in those hotel rooms with their friends to have parties … the National Harbor is a business, it is not a playground, it is not an amusement park.” 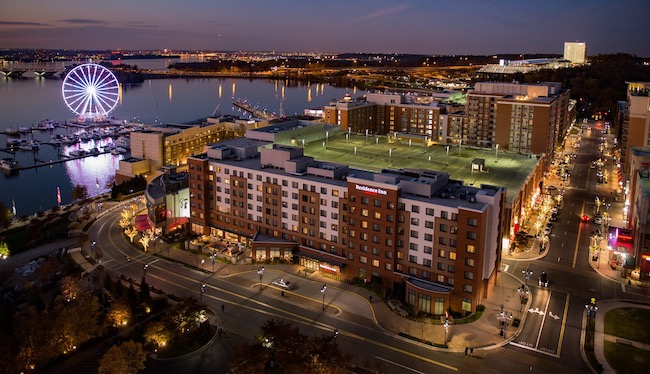 It is unclear if the Hampton Inn is the hotel the executive is referring to, or if the problem is widespread throughout the harbor. A reopening date for the hotel has not been announced. A quick check through the hotel reservation’s system showed no rooms available for the next week, with reservations opening again the week of Thanksgiving.

The National Harbor will be continuing with some of its holiday traditions, starting with the holiday tree light show on November 14. The show takes place every 30 minutes from sundown to 9 p.m. On weekends the show is enhanced with real falling snow. Visitors are required to wear masks and observe social distancing guidelines. The State of Maryland does have a curfew in place that requires children under 17 to be supervised after 10 p.m. on weekdays and 11:59 p.m. on Fridays and Saturdays.