Two bottlenose dolphins have been spotted in the Potomac, and you – the public – have been invited to help name them!

The contest is being run by the Potomac Conservancy and the Potomac-Cheapeake Dolphin Project and will happen in two phases. Name ideas are being submitted, until May 24 and then public voting will take place in the month of June. Visit the contest website for the full details on how you can participate.

Until the new names are chosen, the dolphins are being called D1 and D2. While it's hard for us to tell them apart, scientists can identify them by their dorsal fin characteristics.

Courtesy of the Potomac Conservancy

Dolphins in the Potomac

Did you even know that dolphins came this far north? During the warmer months of spring and summer, this is where they come to have their babies and nurture them, in the safety of the bay and river!

Scientists estimate that THOUSANDS of dolphins come through our area, and they are currently working on ways to identify the individual dolphins as they're spotted.

Courtesy of the Potomac-Chesapeake Dolphin Project

It's such a regular sight on both the Maryland and Virginia sides that the University of Maryland Center for Environmental Science has created an app to track them. The app is called Chesapeake DolphinWatch and can be downloaded for iPhone and Android. You can also access a web version of it if you want to report a sighting.

According to the data collected, sightings begin in the springtime but peak in July. It seems like June to August are the best months to find dolphins in our area. Head to any of the river or bay-front parks and try to spot them yourself! 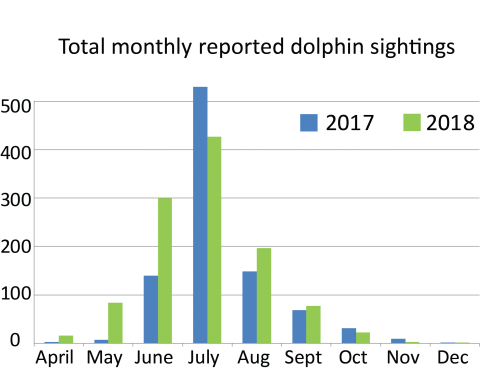 Courtesy of the University of Maryland Center for Environmental Science

Have you ever seen dolphins in the Potomac River or Chesapeake Bay? Tell us about your favorite dolphin sightings in the comments!