The bulk of the money, $7.3 million, will go towards improvements at Centennial Park.

Howard County has announced it will be using new grant funds to renovate fields, lighting, and playgrounds at three public parks. In a press conference on August 5, County Executive Calvin Ball said Howard County was using $8 million from a Local Parks and Playground Infrastructure Funding grant from the State of Maryland on projects at Schooley Mill, Warfield’s Pond, and Centennial Parks.

Most of the money will be spent at Centennial Park West to fix and replace the turf at sports fields and baseball diamonds.

During the pandemic, the demand for public parks grew as people spent more time outside. Centennial Park has always been busy, hosting practices and games for softball, baseball, lacrosse, football seven days a week, from dawn until after dark. The grant will allow the county to replace the aging, rusting lighting that allows teams to play after dark and renovate the park’s athletic fields.

The county plans to completely replace the grass at the park’s three baseball diamonds with synthetic turf and add new amenities. Officials will evaluate whether or not to replace the parks' two natural fields with one synthetic turf stadium or two synthetic multi-purpose fields. The project scope allows for renovating pathways around the athletic fields. 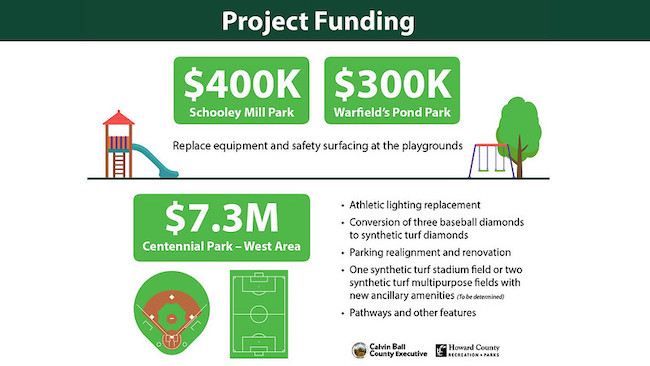 The rest of the grant funds will be used to replace playground equipment and surfacing at Schooley Mill Park and Warfield’s Pond Park. The $8 million grant awarded to Howard County is part of a bigger allotment of $85 million created by the Maryland State Legislature in 2021 to improve and repair county parks across the state.

An additional $140 million in grant money was also approved to go improvement at state parks. Two projects that have already been announced for this grant include the creation of the Harriet Tubman Underground Railroad Visitor Center and the acquisition of Sandy Point State Park.

Are you happy to see these improvements? Comment below.