Hurricane Ida to Bring Rain to DC, Maryland, and Virginia

Hurricane Ida to Bring Rain to DC, Maryland, and Virginia

The remains of Ida are projected to bring heavy rainfall to the region mid-week.

Hurricane Ida made landfall on Saturday, August 29, exactly 16 years from the day Katrina hit and devastated Louisiana. The category 4 storm brought winds of up to 150 mph, rain, flooding, and life-threatening storm surge. The storm hit near Port Fourchon and is the strongest hurricane to hit the state since 1850. The fast-moving storm tore roofs off buildings and left one million people without power.

By Monday morning, the storm was downgraded to a tropical storm and began to move inland. Ida is projected to move quickly through Louisiana and Missouri and into the Tennessee valley.

On Wednesday, remnants of the storm are projected to reach D.C., Maryland, and Virginia, bringing as much as 5 inches of rain to the mid-Atlantic region. Heavy rains rolling in on Wednesday morning could trigger flash flood watches and warnings. Wind gusts of up to 30 mph could also impact travel on the region's highways and bridges. Temperatures will stay in the '70s and rain is expected to dissipate on Thursday morning, sparing the region from a stormy holiday weekend. 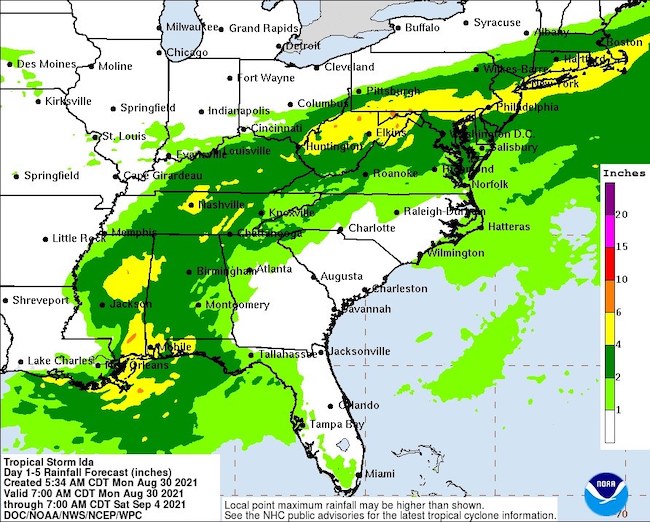 As Tennessee braces for the heavy rain from Ida, people in southern Louisiana are venturing out to survey the damage and rescue survivors. So far, one death has been blamed on the storm and the famous “Cajun Navy” has deployed to help rescue residents trapped by high water.

Utility workers from across the country will be working to fix downed power lines and restore service to more than a million residents. Emergency telephone lines were down in the New Orleans area, forcing residents to turn to social media for help. Officials are working to get 911 service back up and are encouraging people to stay in the safety of their homes until things get back to normal.