Longmont, Greeley, and Denver Rank in Top 10 Boomtowns in America

Longmont, Greeley, and Denver Rank in Top 10 Boomtowns in America

Colorado continues to be a coveted destination for new residents.

Hello, Longmont! According to SmartAsset.com's Top Boomtowns in America – 2019 Edition, this Boulder County city is the No. 1 boomtown in the country.

"Longmont, Colorado leads the way in our study on the top U.S. boomtowns. It ranks in the top 25% of the study for all metrics we considered. Its economy has been doing well, as it ranks ninth overall for its yearly GDP growth from 2013 through 2017, at more than 5%. Longmont has top-30 rates for its unemployment rate and high five-year housing growth rate, at 2.6% and approximately 18%, respectively," Smart Asset relates.

Longmont was joined on the ranking by Greeley, ranked No. 5, and Denver, ranked No. 7. This probably surprises no one, as Colorado and the Front Range has made many, many growth rankings as of late. Our state is growing at a rate only matched by a few others in the country.

"Colorado, Texas and South Carolina dominate the top 10. These states each claim three of the top 10 boomtowns nationwide. They stand out for their low unemployment rate and high five-year housing-growth rate," the study says. Only one town on the top 10, Miami, was not located in one of the three aforementioned states. 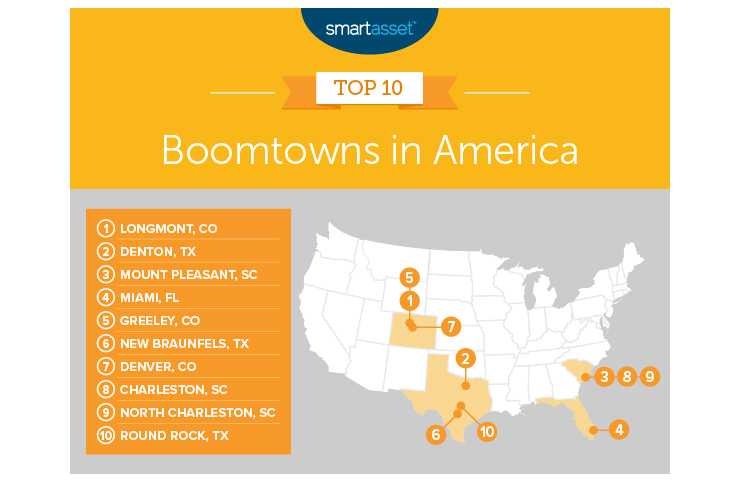 SmartAsset.com looked at 500 of the largest cities across seven metrics to come up with its rankings. Population change, unemployment rate, change in the unemployment rate, GDP growth rate, housing growth, and more were factored into the report.

After calculated, it was found that Greeley actually experienced population and economic growth of at least double to the average of the study.

"The population of Greeley, Colorado increased by almost 9% from 2014 through 2018, more than double the average population change of all cities in our study. Greeley ties with Longmont for lowest unemployment rate in the top 10, at 2.6%. Our data indicates that Greeley’s economy is thriving: The city experienced a one-year decrease in unemployment rate of 0.5% from August 2018 to July 2019 and an annual GDP growth of more than 5% in the five-year period from 2014 through 2018," the report relates.

So where are people not flocking to? It appears that would be the Midwest and Northeast, as neither region had any cities ranking in the top 50 of the report.

You can see more about the methodology and results of the report on the SmartAsset.com website.

Colorado 2021 Leaf-Peeping Guide: When and Where to See the Fall Colors