Maryland Got the Most Robocalls of Any State Last Year

Maryland Got the Most Robocalls of Any State Last Year

According to a new report, Maryland residents were besieged by robocalls in 2019.

To answer or not to answer, that is the question most Marylanders ask themselves when they see an unknown number come up on their phones. If you feel like you get an exorbitant amount of robocalls, that’s probably because you do. A report compiled by Let’s Talk showed Maryland residents got the most robocalls out of any state in 2019.

The cell phone review site pulled data from the Federal Trade Commission and determined Maryland residents got an average of 18 robocalls per month in 2019. Maryland residents were also more likely to file complaints with the FTC for the unwanted calls. Coming in second was Nevada, with an average of 16.5 calls per month and rounding out the top five were Colorado, Delaware, and New Jersey.

The study also looked at the type of robocalls flooding phone lines. The highest percentage of calls—45 percent—were scam calls, up from 17 percent in 2018. Other categories of calls included reminders for doctor and other types of appointments, payment reminders, and telemarketing calls. Surprisingly, telemarketing calls made up the smallest percentage, at just 11 percent.

Robocalls are harder than ever to avoid because the caller ID tends to mimic the area code where the phone is registered. But there is a way to reduce the number of calls you get. First, report those unwanted calls to the FTC. Next, contact your cell phone service carrier and find out what kinds of services they have to block or stop robocalls. And finally, when you get a robocall, don’t answer it and do not call the scammer back. 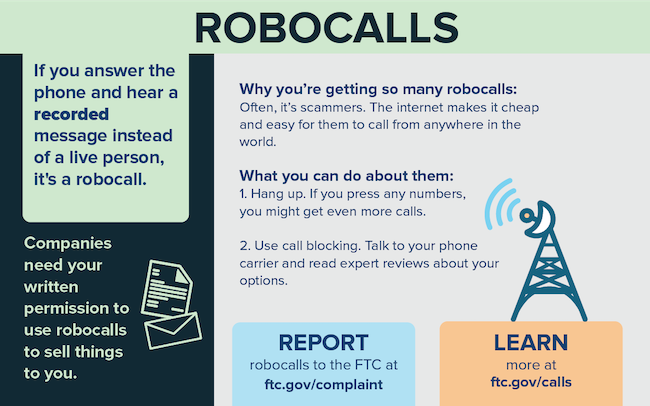 A new law passed earlier this year will help combat unwanted robocalls. The Telephone Robocall Abuse Criminal Enforcement and Deterrence Act (or TRACED) can fine offenders up to $10,000 per call.

If all else fails, you can move to Alaska. Residents in the “Land of the Midnight Sun” state only got an average of 3.3 calls per month.

What is your strategy for getting rid of robocalls? Tell us in the comments.