Maryland Man Feeds 400 Needy Families Out of His Garage, 3 Days a Week

Maryland Man Feeds 400 Needy Families Out of His Garage, 3 Days a Week

The pandemic's inspired countless good deeds from charities and businesses, but individuals have also risen to help their communities. Look no further than Silver Spring resident Rufino Fuentes, who's taken up the task from his garage!

Three days a week, Fuentes volunteers his time providing food for families in need. Essentials like bread, milk, and fresh produce are procured from the USDA, and his church, Iglesia Baptist de Washington, delivers the shipments to his house. The food is stored in his garage, where families can claim their supplies. 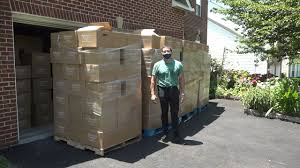 Around 400 families rely on his services, as many are unemployed and struggle to make ends meet.

“They lost their job, they have no income and large families and that broke my heart," he told WJLA, who noted that Fuentes makes all of this happen while working full-time.

His actions have had a positive impact on the people around him; neighbors reportedly help distribute food deliveries.

“They lost their job, they have no income and large families and that broke my heart."

Food insecurity has become pronounced during the pandemic, and with unemployment on the rise, food banks struggle to keep up with the increased demand. Back in April, Feeding America predicted an extra $1.4 billion would be needed over the next six months to continue providing their services.

As an immigrant from El Salvador, Fuentes understands the need for community in times of distress and calls upon others to do their part.

“They don’t have the opportunity I have so why not use my free time to help others," he concluded. “I want to invite other people out there to try to do the same thing. Sooner or later we will need help from others.”

Fred Rogers once told us to "look for the helpers" during dark times, and it's clear from Fuentes' incredible generosity that he's one of them!

What do you think of Fuentes' efforts? Do you know of anyone who's been helping their community? Let us know in the comments!