The case involved more than 47,500 cases of out-of-state fake claims.

The scheme was uncovered when officials noticed a large number of out-of-state claims being filed, particularly in the Pandemic Unemployment Assistance program. Fraudsters used stolen personal information to file more than 47,500 claims, which were halted by the Maryland Department of Labor before they could be paid out.

“Thanks to the efforts of our Labor Department, not only did we identify the fraudulent activity here in Maryland and save the taxpayers half a billion dollars, but we also helped federal authorities uncover related illegal activity in states across the country,” said Hogan. “This criminal enterprise seeking to take advantage of a global pandemic to steal hundreds of millions—perhaps billions—of dollars from taxpayers is despicable. We will continue to work with both the U.S. Attorney and the U.S. Department of Labor Office of Inspector General on this ongoing investigation.” 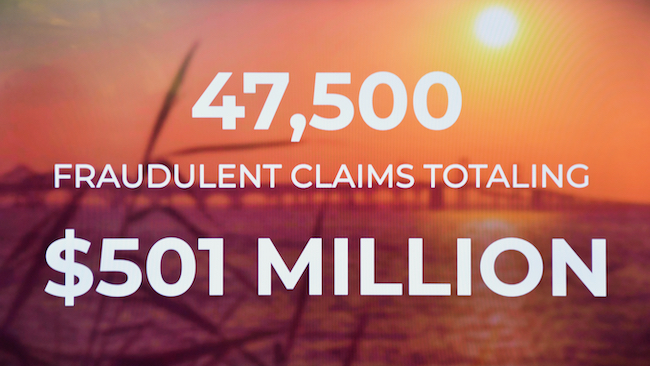 The Maryland Department of Labor has processed 96.4 percent of claims and paid out $4.3 billion thus far. If you believe your information has been used to file a fraudulent claim, you can fill out a request of investigation of unemployment insurance fraud form at the Department of Labor website.

This PUA program, authorized by the CARES Act, is largely used by independent contractors and allows claimants to self-certify their employment. That feature has made the program highly susceptible to fraud in state unemployment systems across the country. The fraud investigation temporarily stopped payments to some unemployed residents in Maryland, but the state says those payments have resumed.