Vaccine sites at M&T Bank Stadium and the Southern Maryland Blue Crab Stadium will be operational by March 11, 2021.

Governor Larry Hogan says the state is making progress towards getting the state vaccinated. In a press conference on February 23, the governor announced the creation of a new central website that will allow people to book appointments for vaccinations around Maryland. Hogan also announced the opening of the M&T Bank Stadium vaccination site on Thursday, February 11, and the addition of a new site in Waldorf at the Southern Maryland Blue Crabs Stadium next month.

A central website will be online in March that will allow Maryland residents to pre-register for state-run mass vaccination sites only. Residents will still have to register directly with pharmacies and providers to get vaccines directly from the federal government. Maryland has distributed 99.6 percent of its initial allocation, averaging almost 30,000 shots per day. Governor Hogan said the state will continue to add new vaccination sites in preparation for increased deliveries of vaccines.

“Following both the federal and state vaccination plans, we continue to broaden the distribution network to ensure as many points of access as possible in every single county. We are utilizing every single dose we are allocated, and building an infrastructure with the capability of doing up to 100,000 shots per day, just as soon as they are made by the manufacturers and allocated to us by the federal government.” 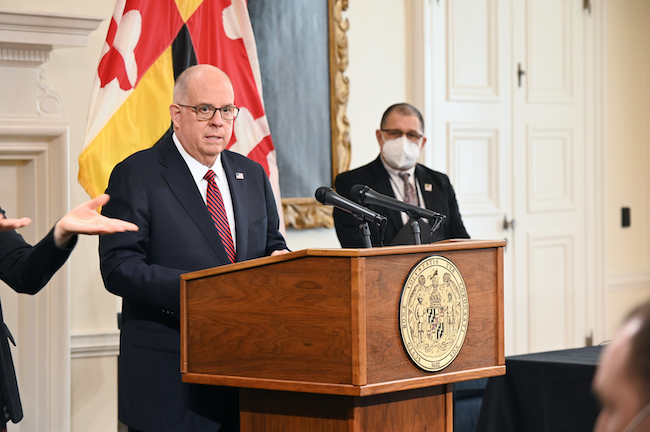 Officials expect the site at M&T Stadium to average 2,000 shots per day by next week, with the capacity to produce more. The fifth mass vaccination site at the Southern Maryland Blue Crab Stadium in Charles County will be staffed exclusively by FEMA and will also be capable of administering thousands of shots per day.

The Governor is also warning residents to watch for scams related to COVID-19 vaccinations. The U.S. Attorney’s office in Maryland has filed a criminal complaint against three individuals in a scheme to sell vaccines. Scammers pretending to represent medical companies have promised to deliver vaccines in exchange for money and personal information. Governor Hogan wants to make it clear that no one can charge you for a vaccine or force you to provide your social security or insurance information to get one. If you are approached by someone or come across a suspicious website, please report it to the authorities.

Which location is the best vaccination center for you? Let us know in the comments.