Go back in time to the creation of D.C.'s treasured landmarks.

A new exhibit at the George Washington University Museum is shining a light on the early planning of the nation’s capital. “Best Laid Plans: Designs for Capital City” showcases historical documents, paintings, and renderings proposed by Pierre L’Enfant, the original city architect. The exhibit also features paintings by Peter Waddell and prints from the Albert H. Small Washingtonian Collection.

After the Residence Act was passed in 1790, President George Washington selected Pierre Charles L’Enfant to design the new Federal City. L’Enfant, a French architect, imagined a city laid out in a grid with a Congress house, President’s house and a mile-long scenic avenue, the future site of the National Mall. L’Enfant’s plan was inspired by the cities of Europe and has been memorialized in paintings by Peter Waddell. 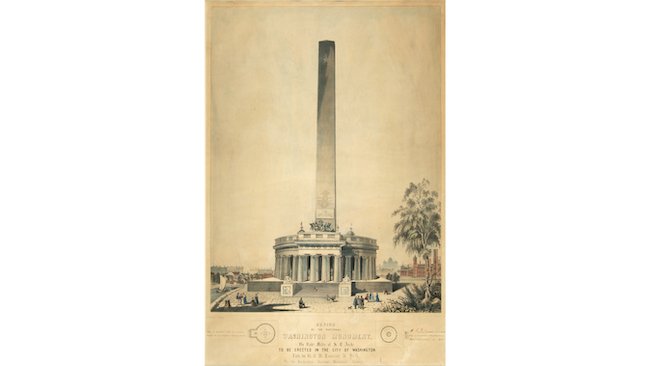 The New Zealand painter’s landscape renderings of early D.C., The Indispensable Plan and The Village Monumental, are featured in the exhibition. One of the starkest differences in design is the earliest version of the Washington Monument, seen above. Instead of the 500-foot obelisk, the first design featured a round columned building with a capped tower. The original plan also featured a suspension bridge to Arlington instead of the arched bridge construction.

The White House, originally called the President’s residence, is only one-fifth the size of L’Enfant’s design. After the building was damaged in the War of 1812, its charred walls were painted white, and the name was changed.

History buffs can visit the exhibit along with its sister exhibit, “Songs of the Civil War,” through Dec. 22, 2019. Visitors can use listening stations to hear patriotic songs created during the Civil War. Painter Peter Waddell will be giving a free lecture on his paintings at the museum on July 15. Docent-led tours of the museum are held Saturdays and Sundays at 1:30 p.m. Find more information here.

Which design of the Washington Monument do you like the most? Tell us in the comments!