The discovery of Macrobdella mimicus marks the first time a new leech species has been discovered in 40 years.

Scientists at the Smithsonian National Museum of Natural History have discovered a new leech species—Macrobdella mimicus—living in the Washington, D.C.-area swamps. The mimicus is first new leech species to be discovered within the last 40 years. The scientists then documented the new species in the Journal of Parasitology where they discussed their findings.

The Macrobdella mimicus has a distinct dark green coloring with orange spots all over its body (unlike the common black and dark brown leeches) and is the length of one cigarette and width of two cigarettes.

Admittedly, the leech is cool-looking even though it makes my skin crawl! 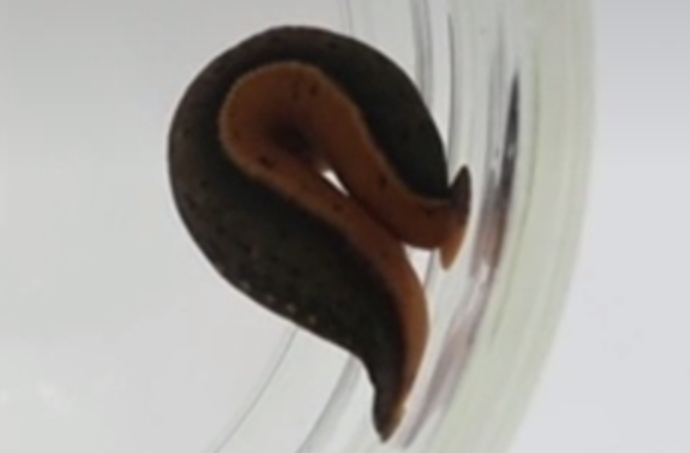 Though the species of leech was initially found in southern Maryland, it's been determined that it can live in swamps anywhere on the East Coast of the U.S., from northern Georgia to Long Island.

The scientists gathered some of the specimens and performed a DNA test that revealed that they differed from others by six to eleven percent, which was the identifying factor in determining that this was indeed a new species.

The leech was also found to have its row of pores placed farther down on its body, which could indicate a different mating method. In addition, the mimicus has three jaws with 56 to 59 teeth each and the ability to suck two to five times its body weight in blood—that's really scary!

But, don't worry: the scientists are not issuing a warning. The leeches have not caused any harm thus far—they simply just want to show you how the world can continue to grow!

What could be discovered next? Time will tell!

What do you think? Is this new leech cool or creepy? Tell us your thoughts in the comments!