The Maryland Department of Health is still investigating the source of the infections.

The number of cases of salmonella infections at the Moby Dick House of Kabob has increased to 21. The investigation of the outbreak at the DMV restaurant chain began on Sept. 10, after individuals complained of symptoms after eating hummus from the restaurant. The Maryland Department of Health suspended the sale of hummus from all of the restaurant locations but has since lifted the ban. The investigation into the source and cause of the infection is ongoing.

Moby Dick House of Kabob has 24 locations in Virginia, Maryland, and Washington, D.C. Department of Health officials in Montgomery County have focused on two locations in the outbreak, one in Bethesda and the other in Germantown. Between 90 and 100 containers of hummus from both locations have been held for inspection. Moby Dick House of Kabob was ordered to stop selling hummus at all of its locations. The stop order was lifted on Oct. 4, 2019. Customers in possession of hummus purchased around Sept. 10 are encouraged to throw it away and seek medical treatment for any adverse symptoms.

Symptoms of a salmonella infection include fever, diarrhea, and abdominal cramps. Symptoms can start within four to six hours after consuming a tainted food product. People with salmonella are usually better within seven days and do not need to visit a doctor. Certain groups, including small children, the elderly and people with compromised immune systems may get very sick and need hospitalization. You can find more information about salmonella on the CDC website. 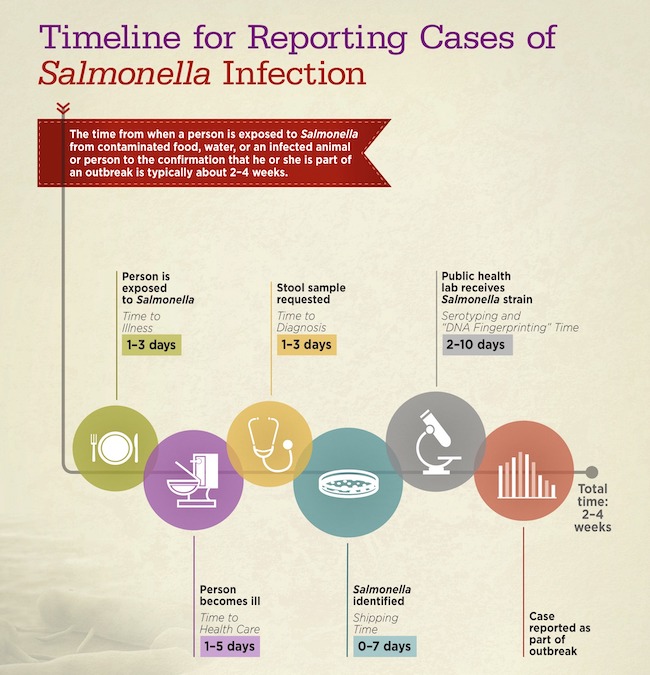 Courtesy of Maryland Department of Health

How do you lower your risk of getting foodborne illnesses? Share in the comments!