Paintings by George W. Bush to Be Exhibited at The Kennedy Center

Paintings by George W. Bush to Be Exhibited at The Kennedy Center

The painting will be featured in the opening of the Kennedy Center’s new space called “The Reach."

A collection of paintings by former President George W. Bush will be exhibited at the new Kennedy Center annex opening in September. The former president began painting shortly after leaving office and has published a book of his paintings. A selection of those paintings is part of an exhibition traveling around North America. The exhibit will be on display in Studio K from October 7 to November 15, 2019.

The collection includes 66 paintings of military veterans, an artistic tribute to members of the armed forces by the former president. The oil paintings are also featured in a hardcover book called Portraits of Courage: A Commander in Chief’s Tribute to America’s Warriors. Proceeds from the sale of the book are being donated to the nonprofit George W. Bush Presidential Center, an organization that helps members of the military transition to civilian life.

This collection will be the first exhibition hosted in the new Kennedy Center annex. 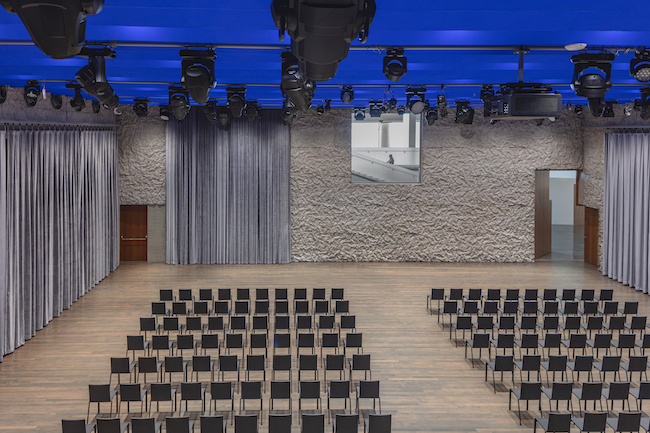 Studio K in The Reach at The Kennedy Center

“The Kennedy Center is proud to share these works—painted by a living president—that honor the men and women who defend our freedom to explore, celebrate, and create art," said Kennedy Center President Deborah F. Rutter. “This collection, arriving at the REACH on the heels of its public opening in September, showcases the versatility of the space, inviting patrons and tourists to experience the new expansion for the first time.”

The public can get free reserved, timed tickets for the Studio K exhibition beginning on September 3, 2019.

The Reach opens on September 7, 2019, with a free 16-day festival. The multi-day event includes performances by over 1,000 artists including Arrested Development, The Second City, Debbie Allen, Alan Menken, and more. Visitors can roam the 130,000 square feet of green space and view exhibitions in three new pavilions. Tickets are free and can be reserved online now through The Kennedy Center.

Do you plan to go see the George W. Bush's artwork while it's here? Are you going to the festival to celebrate The Reach's opening? Tell us in the comments!