The man attacked two teenagers and a young girl placing flyers on the trail.

Update: The man has been identified and arrested.

Maryland National Capital Police are asking for the public’s help to identify a man who assaulted three young people along the Capital Crescent Trail in Bethesda. The kids were posting flyers in memory of George Floyd when a male cyclist came up to them and started arguing with them. He grabbed flyers out of a little girl's hands and charged at one of the teens. Police got involved after a shocking video of the incident was posted online.

They were putting up signs to commemorate the death of George Floyd. He wasn't having it. pic.twitter.com/eukrXrxoLN

The assault happened around 12:45 p.m. on Monday, June 1, near the Dalecaria Tunnel on the Capital Crescent Trail. The trail has six bridges and a tunnel and is popular among walkers, joggers, and bicyclists. In the video, the man is seen walking up to a little girl and grabbing flyers out her hands while her friends tell him not to touch her. He then grabs his bike and charges the young man, knocking the phone he was using to record video onto the grass. The kids said initially the suspect rode past them and then returned to confront them about the flyers. 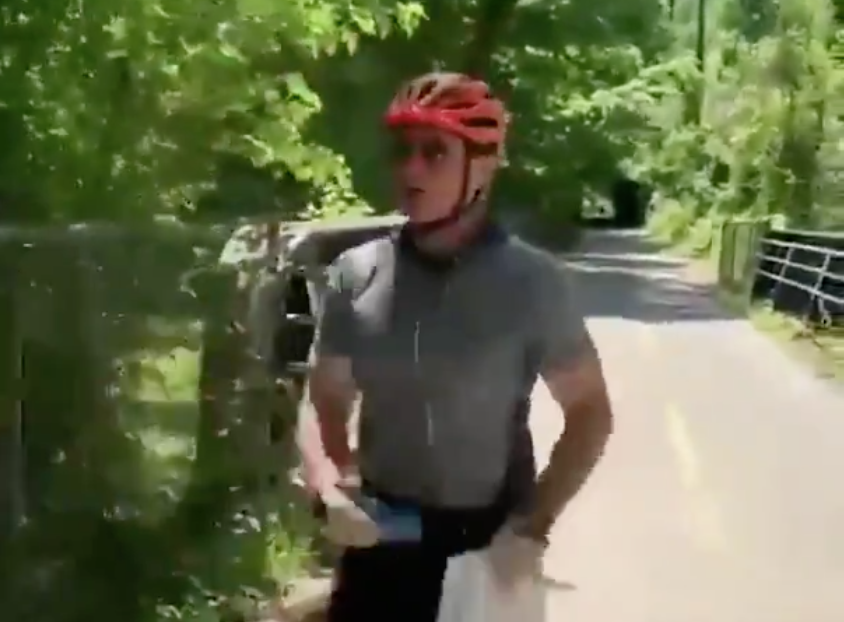 The suspect is described as a white male, 6 feet tall with a medium build, between the ages of 50 and 60. He was wearing a red bike helmet, gray t-shirt, black shorts, and sunglasses, and was riding a white bicycle. Pictures of the man were posted on the Park Police MC Twitter Page on June 2. Park Police are asking anyone that can identify the man or has information about the incident to call Detective Lopez at 301-929-2774. Please reference the case number 20001297.