Toll rates for new express lanes were released to the public for the first time.

The Maryland Transportation Authority Board has given the public the first projections of toll pricing for the first phase of the new I-270 toll road spanning from Maryland to Virginia. The project would relieve congestion on the American Legion Bridge, adding two high-occupancy toll (HOT) lanes from the American Legion Bridge to I-270 and north on I-270 to I-370. A pedestrian lane would also be added that would connect to the C&O Canal. The rates would vary depending on volume and the time of day; the first toll road of its kind in Maryland.

Rates would start at 25 cents per mile and top out at 96 cents, charging an average of $4.50 each way. The highest rates would be charged during the morning and evening commutes, between $7 and $11 each way. Cars and buses with three or more people can use the HOV lanes for free. Tractor-trailers would have to spend significantly more, $1.21 to more than $22 per mile at peak travel times. Travelers who don’t want to spend money can still fight traffic in the old travel lanes. 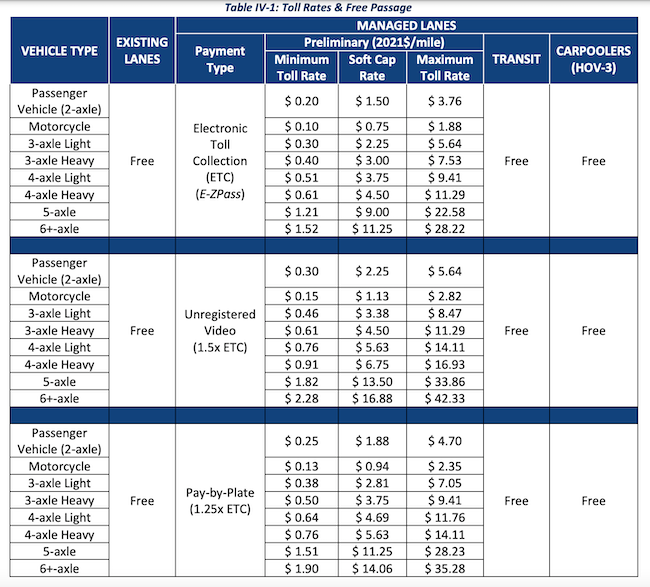 The MDTA has chosen Transurban and Macquarie Capital, both Australian companies to develop, fund, and operate the new toll lanes under a 50-year agreement. Transurban is already operating more than 50 miles of road in Virginia including parts of the I-95, 395, and 495 interstate highways.

The project still has to be approved by the board this March and can’t start until it gets final approval in May. The first phase that includes the expansion of the American Legion Bridge is slated to cost about $4 billion. Residents can follow the progress of the planning stages and changes to toll prices at mdta.maryland.gov.

Would you pay these tolls to avoid traffic mayhem? Let us know in the comments.