Report: STDs on the Rise Across the Country—But Especially in DC

Report: STDs on the Rise Across the Country—But Especially in DC

The Centers for Disease Control and Prevention (CDC) just published a report summarizing the national statistics on sexually transmitted diseases (STD) from 2018. D.C. is front and center on the lists of documented cases.

The results of the study are sobering. The annual report, titled "Sexually Transmitted Disease Surveillance 2018," shows a steady increase over the past five years in the number of chlamydia cases, gonorrhea cases, and syphilis cases, including the rates of congenital syphilis in newborn infants resulting in death.

The report shows that just under 2.5 million cases of these three sexually transmitted diseases (STDs) were documented in 2018. Washington, D.C., has the highest number reported cases of all three diseases reported for the study period.

According to the CDC:

"Half of STDs are among young people aged 15 to 24 years. These infections can lead to long-term health consequences, such as infertility; they can facilitate HIV transmission; and they have stigmatized entire subgroups of Americans."

—Gail Bolan, M.D., Director, Division of STD Prevention for the National Center for HIV/AIDS, Viral Hepatitis, STD, and TB Prevention at the US Centers for Disease Control and Prevention 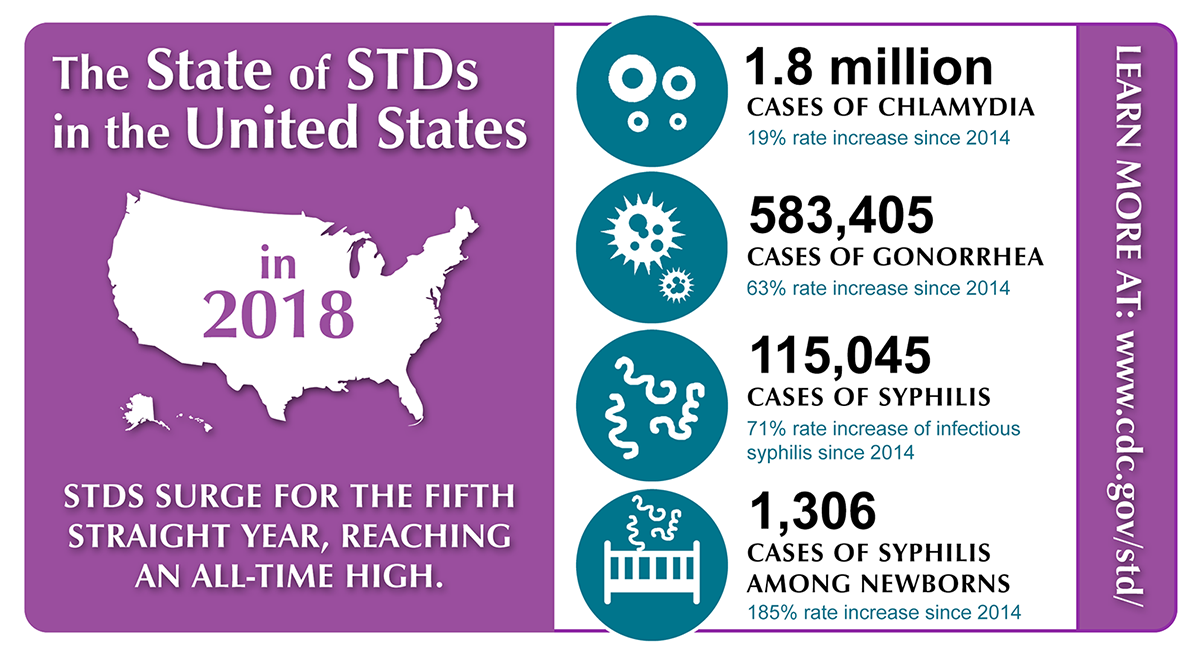 In Washington, D.C., 611 cases of gonorrhea were reported, along with 1,299 cases of chlamydia and 40 cases of syphilis. This may be due to a number of factors, including a higher rate of reporting from readily-accessible testing sites and free testing available throughout the city. Other states could possibly have more cases that simply go undocumented without proper testing.

Behavioral causes for the rise in these STDs may include a decrease in condom usage and fewer people seeking treatment options when they detect symptoms. One direct effect of this surge in syphilis cases is the higher number of infant deaths attributed to congenital syphilis: 1,306 cases of newborn death nationwide.

The purpose of the report is not just to inform, but to propose changes as well. The CDC is encouraging people to increase their own awareness about STDs by following three steps: talking about them, testing for them, and treating them. The report also stresses the importance of programs for testing, treatment, and public education on the subject at all levels of healthcare policy, not just national.

"It is imperative that federal, state, and local programs employ strategies that maximize long-term population impact by reducing STD incidence and promoting sexual, reproductive, maternal, and infant health," Bolan said. "The resurgence of syphilis, and particularly congenital syphilis, is not an arbitrary event, but rather a symptom of a deteriorating public health infrastructure and lack of access to health care. This points to our need for public health and health care action for each of the cases in this report, as they represent real people, not just numbers."

To learn more about the study, you can read the official CDC press release summarizing the report here, or you can view the full report.

**The photos and infographics in this article are courtesy of the CDC unless indicated otherwise.

Let us know what you think about the report findings in the comments. What are your thoughts on the prevalence of STDs and how to raise public awareness?