Reward Increased to $200,000 for Colorado Woman Who's Been Missing Since Mother's Day

Reward Increased to $200,000 for Colorado Woman Who's Been Missing Since Mother's Day

Suzanne Morphew, 49, went on a bike ride near her home in Maysville, Colorado, and failed to return home. Her husband, Barry, was out of town at the time she went missing and had offered a $100,000 reward for information about her disappearance. As of Thursday, the reward was raised to $200,000 when a family friend matched the amount.

Morphew was reported missing by a neighbor when she did not return home later that day, and the Chaffee County Sheriff’s Office responded to the area of County Road 225 and West Highway 50, west of Poncha Springs. A search began immediately, and hundreds of people have looked for her over the last several days. Rescue teams from law enforcement and Colorado Parks and Wildlife have searched high and low.

Investigators reported on Friday that they found "what's believed to be a personal item" belonging to Morphew. 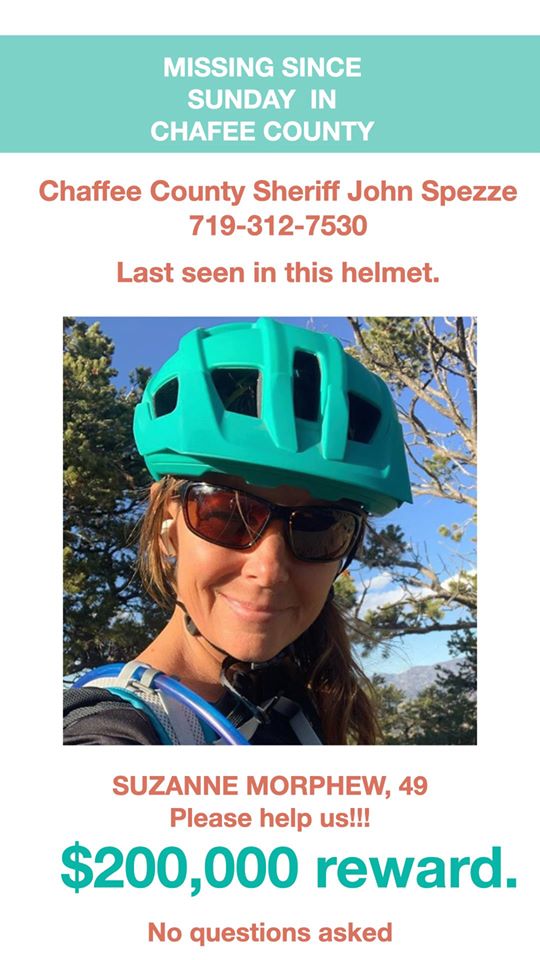 Maysville is a very small community, with less than 150 residents, located between Salida and Monarch Mountain. The area Morphew was biking in encompasses part of the Colorado Trail, a very popular outdoor recreation area, so it's possible there were backpackers and hikers in the area.

Suzanne’s bike has reportedly been found; however, details of its condition have not been released and this has not been publicly confirmed by Chaffee County Sheriff John Spezze. Spezze has told local news he does not believe she was subject to an animal attack and has confirmed it is an open, and possibly, criminal investigation.

Morphew’s nephew, Trever Noel, lives in Evergreen, Colorado, and is organizing a GoFundMe to help her husband and two children, and support the search effort for Morphew. He wants her to know the family loves her and wants her back as soon as possible. Noel has set up a Facebook page Find Suzanne Morphew to keep the information current and share anything that comes up about the case.

The FBI and the Colorado Bureau of Investigation have been called in to assist with the investigation and they have set up a tip line at (719)-312-7530.

*The investigation is active and ongoing.