Have you not responded to the 2020 U.S. Census survey yet?

Neither have 37 percent of Americans, according to response rates updated daily by the U.S. Census Bureau, a federal agency.

So far, 67.7 percent of Virginia households have responded to the once-every-decade survey, according to early August data.

Now the U.S. Census will cut off data collection by September 30 to allow time to compile and submit results by the end of the year, as required by law.

“Building on our successful and innovative internet response option, the dedicated women and men of the Census Bureau, including our temporary workforce deploying in communities across the country in upcoming weeks, will work diligently to achieve an accurate count,” U.S. Census Bureau Director Steven Dillingham said in a statement.

The 63-percent response rate so far lags far behind the 2010 U.S. Census survey, according to the Los Angeles Times, which reports that 75 percent of households responded to to phone or mail surveys—Internet surveys weren’t an option back then.

“Under this plan, the Census Bureau intends to meet a similar level of household responses as collected in prior censuses, including outreach to hard-to-count communities,” Dillingham said in a statement.

To help make this all possible, the U.S. Census is hiring and training more field workers than ever before after initially delaying door-knocking because of COVID-19 concerns. During the week of July 19-25, nearly 84,000 paid temporary workers hit the streets to seek out survey responses across the country. That is triple the number of U.S. Census temporary workers nationally during the last week of June.

In the “Philadelphia” region alone, which includes Washington, D.C., Maryland, and Virginia, there were 16,710 U.S. Census workers that last week of July. That was second-most of any region in the country. 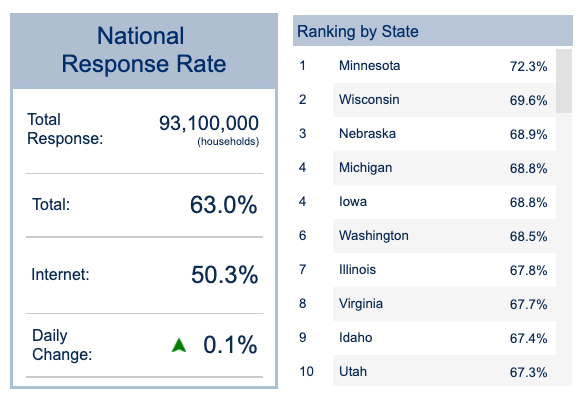 Virginia ranks in the top 8 nationally for its response rate, with 2.5 million households filling out the survey already. Lovettsville, Virginia, is the state’s top-ranking city with an 83.7-percent response rate. See how Virginia’s overall response rate compares to the rest of the country in these rankings compiled by the U.S. Census.

And if you haven’t responded yet and don’t feel like having someone knock on your door during a pandemic, it’s not too late to fill our your 2020 Census online.

Have you filled out the Census yet? Tell us in the comments!