The new museum will feature Army artifacts, documents, and machinery, including the Sherman Tank.

The United States Army has been a pillar of the country since its inception in 1775. Yet it remains the only branch of our military service without a national museum – until now.

The Army Historical Foundation has announced the opening of The National Museum of the United States Army, slated for next year. The museum complex will have more than 185,000 square feet of building space along with gardens, trails, and an amphitheater.

The National Museum of the United States Army is located about 30 minutes from the nation’s capital in Fort Belvoir, Virginia. Construction on the 84-acre project started in 2016 and is expected to cost over $200 million. The museum is being brought to life by funding from The Army Historical Foundation, a nonprofit committed to educating the public about the history of our nation’s armed forces. 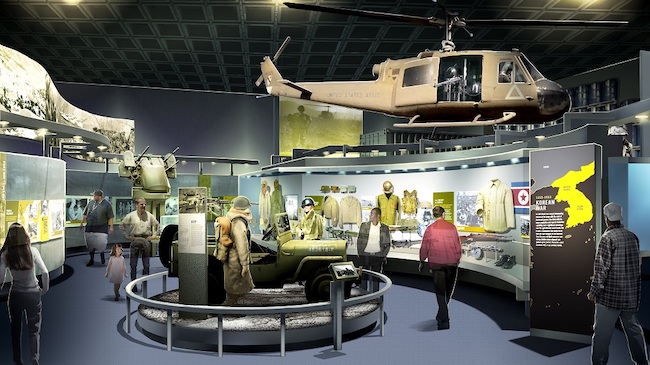 The museum’s main building will feature three main galleries, each representing a soldier’s role in war, culture, and peacetime. The galleries will feature artifacts, documents, films, and paintings from the Army Art Collection. Visitors will start by learning about soldiers in the Revolutionary War, leading through the generations to the wars in Iraq and Afghanistan. Tanks and equipment including the M3 Bradley Cavalry Fighting Vehicle, Sherman Tank, and the Landing Craft or “Higgins Boat,” will be on display.

The museum will have an exhibit for children to complete army missions using STEM applications and a film theater with 300-degree screens. Outside the museum, guests can tour the green spaces and visit The Medal of Honor Garden, a memorial to the award’s recipients. The grounds will also feature an interactive Army trail, outdoor concert amphitheater, and a parade ground complex.

The museum’s fundraising efforts are still underway. Donors can have their name memorialized in different spots around the museum, becoming a permanent fixture in the new National Museum of the United States Army.

What do you think? Are you excited to visit this museum? Tell us in the comments!