Romeo and Juliet. Cash and Carter. Sawyer and Merrill.

Last week, the Virginia Zoo announced the passing of their two Asian small-clawed otter companions, Sawyer and Merrill, within just a few weeks of each other. The life expectancy for otters is 12 years, and Sawyer, born on October 24, 2008, met that with a long and healthy life until just a few weeks ago. Merrill, born in 2005, exceeded it by living to the ripe old age of 15. The pair were bonded and described as "inseparable" according to entries on the VA Zoo's blog.

"The bonded pair can be seen floating in their pool, napping on warm rocks and foraging for snacks in the grass in their enclosure. Guests will almost always see the two otters side by side, as the couple is inseparable." —May 25, 2017

The male otter, Sawyer, came to Norfolk from the Bronx Zoo in June of 2010.  He was the more actve and vocal of the two, making "a lot of happy noises, such as squeals" when he was eating. His passing was due to "geriatric-related health complications." Back in May of this year, an ultrasound performed on Sawyer by the zoo's veterinarian "showed a progression of his kidney disease as well as signs of chronic kidney injury." Unfortunately, there is not a cure for that diagnosis, but the veterinarian and keepers were able to provide treatment and keep the little guy comfortable. He was reportedly active and eating well up until the end.

Merrill came from Zoo Atlanta to Norfolk in February of 2014. She enjoyed "sunbathing and cuddling with her mate in their nest, eating, and floating down the waterfall stream to swim in the pool and rest on the floating platform." Merrill, too, was being treated for "geriatric-related health complications" and "mobility issues" but sadly, after the loss of Sawyer, her health and quality of life declined rapidly and it was decided to humanely euthanize her, just a few weeks after Sawyer passed away.

According to the VA Zoo: "Merrill’s long, active life was a testament to the incredible care our Zoo Keepers and veterinary staff put into our work with the animals every day."

No plans have been made for the arrival of any new otters but the zoo has the habitat available and assures the public that any newcomers "will be arranged on recommendation from the Asian Small-Clawed Otter SSP (Species Survival Plan)." The International Union for Conservation of Nature (IUCN) considers them a "vulnerable species" due to habitat loss and reduction in available prey from increased environmental pollution.

The Virginia Zoo closed their statement with the touching sentiment: "the Keepers that cared for our otters will deeply miss them both, and they undoubtedly will be missed by many of our fellow staff, volunteers, and guests." 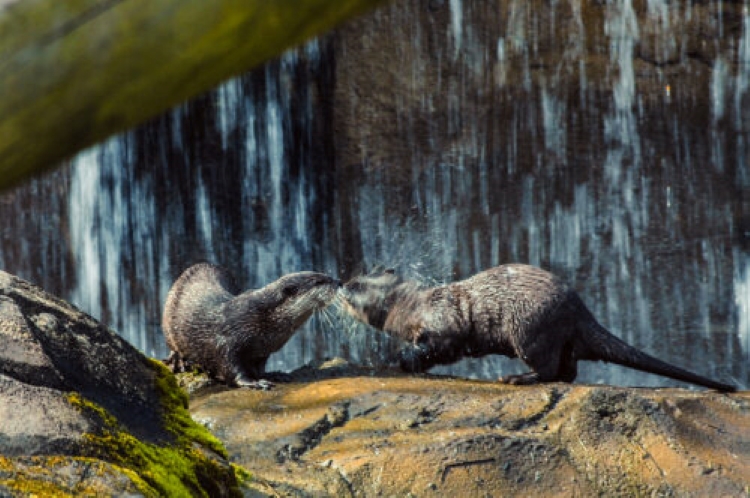 Sawyer and Merrill playing (courtesy of the Virginia Zoo)

Did you ever see the otters at the Virginia Zoo?  Have you been back since the zoo has re-opened? Tell us all about it in the comments!