VSV confirmed in 11 counties across the state.

The Colorado Department of Agriculture (CDA) has confirmed cases of vesicular stomatitis (VSV) in Adams, Archuleta, Boulder, Broomfield, Delta, La Plata, Larimer, Mesa, Montezuma, Morgan, and Weld counties in Colorado. The first case of VSV in Colorado was reported on July 3 in Weld County by a field veterinarian from the State Veterinarian’s Office, says the CDA.

Vesicular stomatitis is a viral disease that primarily affects horses and cattle, and occasionally swine, sheep, goats, llamas, and alpacas. VSV is fairly rare but not unheard of in Colorado, though this year has seen an unprecedented number of cases and quarantines. It generally occurs in the summer, starting in warmer southern states like Texas and moving north as the summer progresses, especially when wet weather is involved. While transmission of VSV is not completely understood, it is generally thought to be transmitted by black flies, sand flies, and biting midges.

While VSV is not usually fatal to animals, it certainly is not pleasant for them either.

"In affected livestock, VSV causes blister-like lesions to form in the mouth and on the dental pad, tongue, lips, nostrils, hooves, and teats. These blisters swell and break, leaving raw tissue that is so painful that infected animals generally refuse to eat and drink and show signs of lameness. Severe weight loss usually follows," says the USDA. 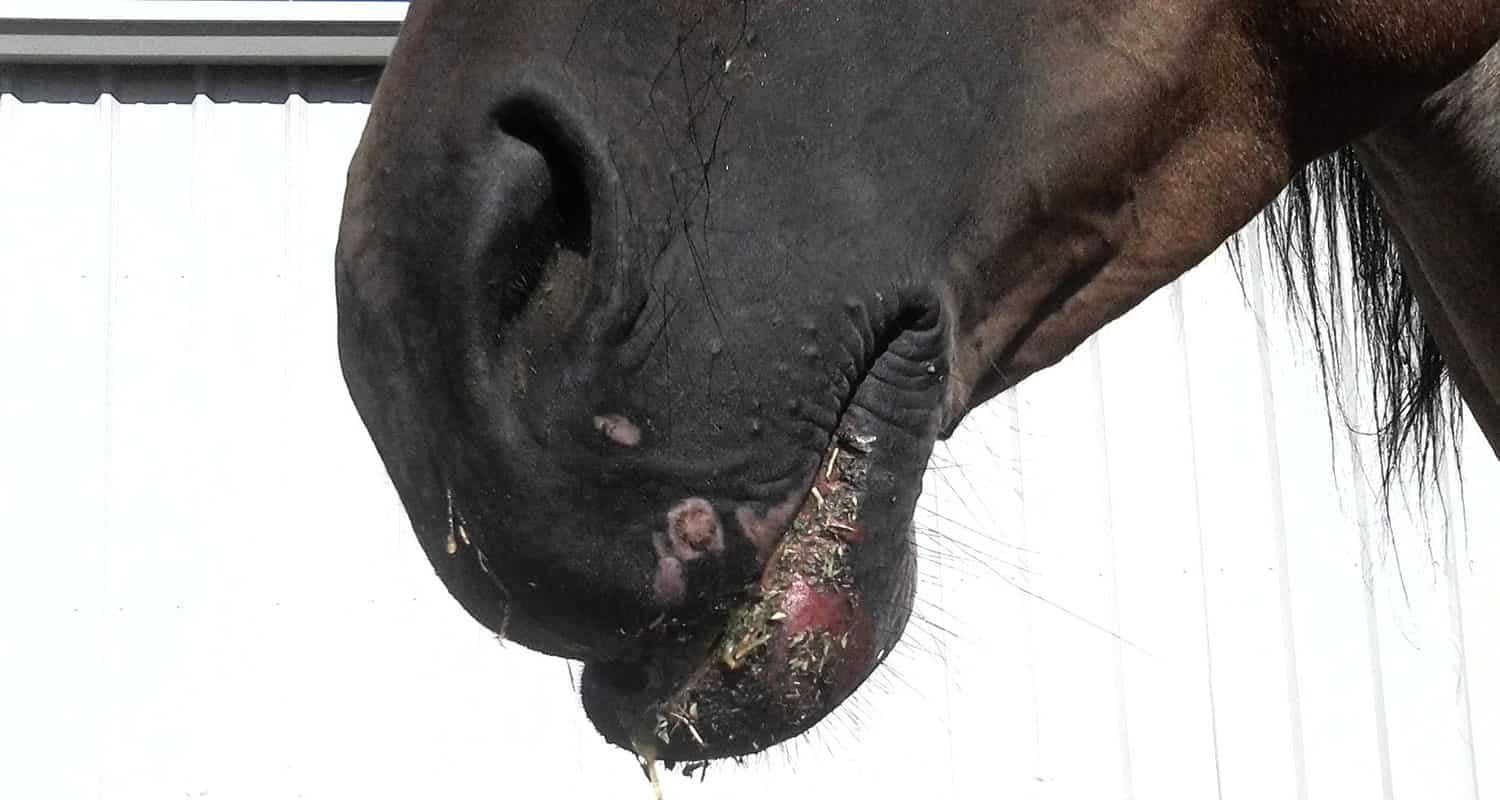 These sores around this horse's mouth are caused by VSV. They are quite painful and animals often refuse to eat or drink once they become too prevalent. Courtesy of Wyoming State Veterinarian's Office.

As of July 31, Larimer County had the most infected animals reported at 78, followed by Boulder County at 44, and LaPlata County at 27. All confirmed cases in Colorado have been in horses with the exception of one bovine case.

While there is never a good time for VSV to raise its ugly head, the outbreak occurs at a particularly bad time of the year: fair and livestock show season. Because of the outbreak, horses from infected counties may not be allowed to enter fairgrounds or participate in events like horse shows, rodeos, and more. It's particularly disappointing for young 4-H members who were hoping to show off their favorite equine at the local fair.

Outbreaks also affect the ability to transport livestock into other states or areas that aren't currently affected.

"We understand that the VSV outbreak and quarantines are impacting the ability for people to bring their horses and livestock to fairs and shows," said Dr. Keith Roehr, Colorado State Veterinarian. "The quarantines and hold orders must be followed, however, for the health and protection of all equine and livestock in Colorado."

In very rare cases, VSV can be transmitted to humans. The CDA encourages livestock handlers to take personal protective measures when handling affected animals and to practice strict fly control in barns, stables, and more to try to head off transmission. You can learn more about the current cases in the state, quarantine information, and prevention tips at Colorado.gov.

Have your horses been affected by VSV? Share your thoughts with us in the comments below.