Some fishermen got a once-in-a-lifetime chance to see a great white shark up close.

A group of fishermen witnessed an amazing site this week in the waters off Ocean City, Maryland. On Monday, June 8, Steven White documented his encounter with a great white shark while fishing with a group on the “Fish Finder,” captained by Mark Sampson. The video runs almost four minutes and ends with a great close up of the fish. Estimates put the shark at 16 to 18 feet.

It’s not overly unusual for sharks to make appearances in Ocean City. Back in October of 2019, fishermen caught two great whites within minutes of one another. The sharks were returned back into the ocean. Great whites are routinely spotted up and down the East Coast, and some have been tagged by researchers trying to learn more about the animals. 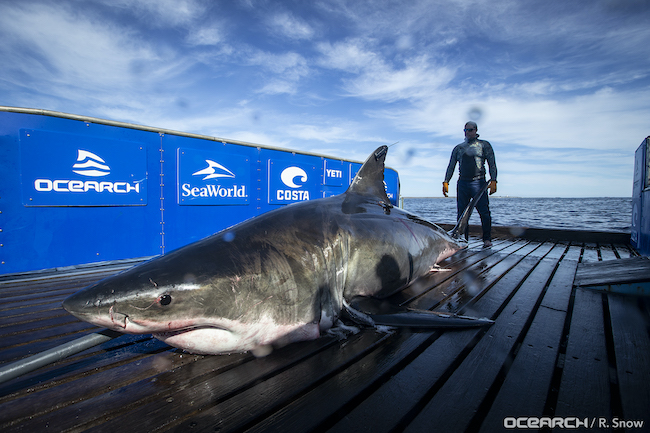 One of the most famous is Mary Lee the Shark. The 50-year-old female shark was tagged by Osearch and her whereabouts posted to a Twitter account. Curious followers got the last ping from Mary Lee on June 17, 2017. It's likely her tracker ran out of batteries. She had over 100,000 Twitter followers at the time, She even inspired a beer, Shark Track Light Lager, by Cisco Brewers.

This sighting appears to be the first of a great white shark this summer near Ocean City, coincidentally on World Oceans Day. The animal is estimated to weigh between 2,000 and 3,000 pounds. Towards the end of the encounter, the crew put a large line of bait in the water, and the shark was more than happy to take a bite. The video is posted on YouTube and has been viewed more than 37,000 times.