The dog survived and is doing well, knowing that her family is safe from danger!

Imagine this: You are sitting comfortably in your home with your dog out back when all of a sudden a copperhead snake slithers its way onto your back porch! Your first instinct when you see the snake is to protect the dog, but what if your dog is thinking ahead of you and has already sprung into action?

Milisa Perez, 16, was just inside her home when she noticed her family's dog, Bella (a pit bull mix), lying on the back porch of their home with a swollen neck and in severe pain. At first, she thought she'd had an allergic reaction to something but that's when she discovered the copperhead snake carcass!

Bella had sprung into action, killing the copperhead snake and protecting her family from harm – nothing was going to stop this girl! She sustained injuries to her neck and nose but was able to make a full recovery.

Milisa did not witness the fight and is thankful for what Bella's ultimate act of bravery. 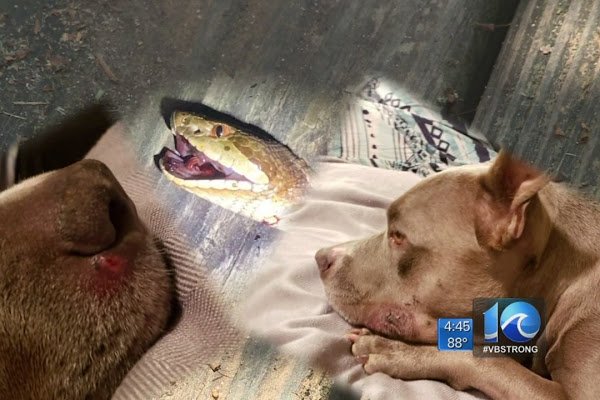 The Perez family rushed Bella to their vet where they were faced with a $4,000 bill, which they had to pay ahead of treatment, and were asked to sign a waiver stating whether to resuscitate her or not. The Perezes chose to pay the bill because she's a member of their family and she had protected them from danger.

If their other dog, Happy (a Shih Tzu), had been in the same situation as Bella, she would not have pulled through. They were thankful that Bella was the dog that was there to save the day.

“She was definitely being protective because the snake was on the porch, close to the entrance way onto our deck, which would have let it right into our house,” said Milisa’s mother, Lisa Perez.

“She saved us, and she saved the little dog,” Milisa said.

If the Perez family had called the Virginia Beach Animal Control, they would not have been able to remove the snake or take the call unless the reptile has entered the home. Instead, the Department of Game and Inland Fisheries would have to handle the situation.

Do you think your family dog would do the same for you? Have you encountered a snake in the Hampton Roads area? Tell us in the comments!