Make sure to welcome Gaston to this new position -- He's ready for action!

The Virginia Beach Sheriff's Office received an anonymous donation in the form of a German Shepherd named Gaston. The 3-year-old pup came fully trained and ready to head straight into the field to detect potential threats.

Gaston earned his Virginia Beach Police Work Dog Association Certificate in February and has been hard at work since then!

According to a report by 13 News Now, Gaston works aside Deputy Aaron Whitehead screening the Virginia Beach Courthouses and other public areas for firearms and explosives. Working alongside an officer is the K9's primary duty.

We recently welcomed a new explosive-detecting #K9 into the VBSO family! K9 Gaston is a 3-year-old #germanshepherd given to us this year by an anonymous donor. His job is to screen the #virginiabeach Courthouse and other public areas for guns and explosives. pic.twitter.com/qQYoScDF3n 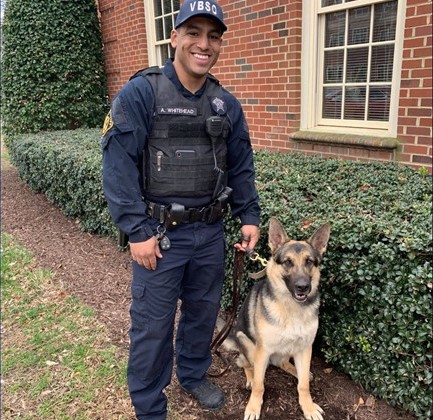 German Shepherds are talented dogs with a keen sense of smell, which is great for detecting any weapons nearby. The breed is generally very approachable, presenting confidence and willingness to meet demands, as well as being easily trainable, loyal, poised, and eager and alert when necessary. German Shepherds will do anything to protect their master or pet owner, making them excellent partners.

They are considered to be the top dog choice for this line of work. Other great police dogs include beagles, bloodhounds, labradors, and rottweilers.

(Side note: I know that Gaston is cute, but he is a police K9 at wor, so if you see him out and about, hold off on your temptation to pet him!).

Have you seen Gaston around Virginia Beach working yet? Do you think he is just adorable? Tell us your thoughts in the comments below!

This K9 is being touted a hero after finding some lost kids in the woods! Read the full story here!