You Can See 'Hamilton' for Just $10 at The Hippodrome Theatre

You Can See 'Hamilton' for Just $10 at The Hippodrome Theatre

The special lotteries for $10 Hamilton tickets will start on June 23.

If you thought tickets to the Tony Award-winning musical Hamilton were out of your price range, get ready to pull out your wallet! Beginning on June 23, 2019, The Hippodrome Theatre in Baltimore will offer 40 tickets ahead of each show for just $10 each. The ticket lottery is part of an effort by the producers of Hamilton to make sure fans can see the show, despite steep ticket prices. The Hippodrome Theatre will be hosting performances of Hamilton from June 25 through July 21, 2019.

The digital lottery for each show will open at 11 a.m. local time, two days before each performance date. You will have until 9 a.m. the day before the show to enter, and each winner will get two tickets. Winners will get an email after the lottery ends and will have until 4 p.m. that day to claim and pay for the tickets online. Winners must show a photo ID and pick up their tickets at the box office. 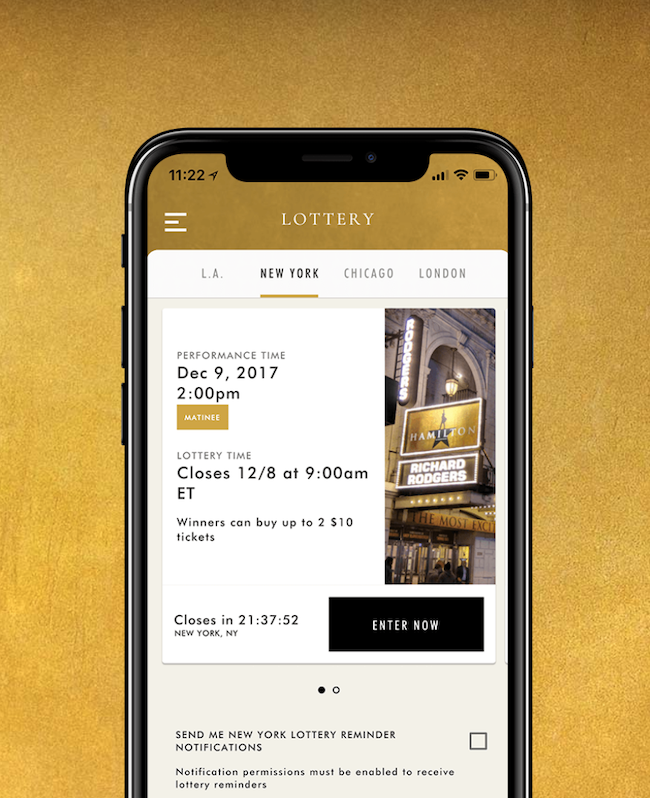 There are two ways to enter the digital lottery: online or through the Hamilton app. The app also allows you to watch videos, play a Hamilton trivia game, take pictures with special filters, and record yourself singing along to hits from the musical. The show has 24 dates scheduled at the Hippodrome, giving you at least 24 chances to get $10 tickets!

The Tony Award-winning Hamilton: An American Musical was created by Lin-Manuel Miranda. Based on the book by Ron Chernow, the musical tells the story of Alexander Hamilton, one of America’s founding fathers, creator of the nation’s banking system, and chief author of “The Federalist Papers.” The show has won dozens of awards, including 16 Tony Awards, a Drama League Award, and a Pulitzer Prize.

Are you going to try and score $10 tickets? Tell us in the comments! And if you're looking for more ways to celebrate the arrival of Hamilton, check out this special karaoke event!