Green Giant breaks a record for the biggest version of a classic Thanksgiving side dish.

Love it or leave it, green bean casserole is a traditional part of the Thanksgiving meal. Green Giant broke a Guinness World Record on November 20, in New York, by making the largest green bean casserole ever at 1,009 pounds. The company beat its own previous record of 637 pounds back in 2017. The Green Giant himself was on hand to help mix up and present the massive casserole.

The green bean casserole was invented in 1955 by Campbell’s Soup, incorporating the company’s cream of mushroom soup. Green beans, milk, and cream of mushroom soup are mixed together, baked, and topped off with French fried onions. The love-it-or-hate-it dish is a staple on Thanksgiving and Christmas dinner tables.

The 1,009-pound casserole was made with 1,069 cans of Green Giant cut green beans, 485 cans of mushroom soup, 65 quarts of milk, and 95 pounds of French fried onions. Ten chefs spent eight hours preparing and cooking the record-breaking casserole. The casserole will be served to 3,000 people through a program in New York City called Citymeals on Wheels. 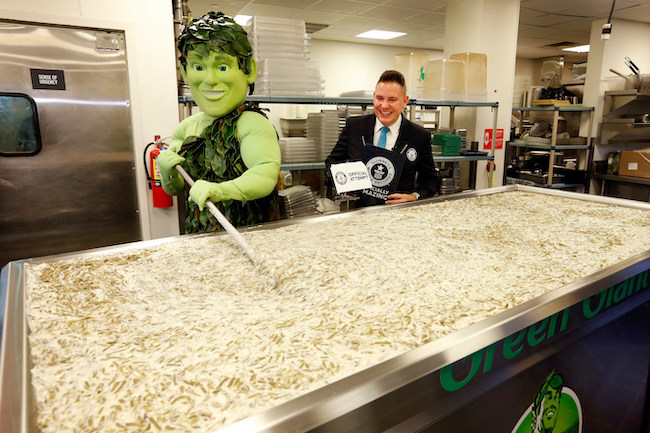 "Green bean casserole is an iconic Thanksgiving dish, and true to form for Green Giant, we wanted to do something giant to bring attention to the importance of giving back to the community this season," said Jordan Greenberg, Executive Vice President and Chief Commercial Officer, B&G Foods.

In a survey conducted by Green Giant, 68 percent of the people asked said they would be serving green bean casserole this Thanksgiving. Over the years, some people have modified the recipe by switching up the type of green beans or adding cheddar cheese and sour cream. You can find the traditional holiday version at greengiant.com.

Do you like green bean casserole? Emoji responses welcome.