The tracks were discovered in a fallen boulder near a popular hiking spot.

A recent report published in the journal PLOS One reveals that a set of fossil footprints have been found at the Grand Canyon, and they're 313 million years old.

Allan Krill is a geology professor from Norway who found the tracks while on an expedition to the Grand Canyon with a group of students in 2016. There are two sets of tracks that show the passage of two animals over what was once a sand dune. The tracks were found on a fallen boulder that Krill happened across near the Bright Angel Trail. He sent photographs of the tracks to a colleague, Stephen Rowland, a paleontologist at the University of Nevada Las Vegas.

What they determined is that Krill had snapped photographs of what are now the oldest-known vertebrae tracks in the Grand Canyon. Though it's not known what type of animal made the tracks, it is the earliest known example of animals utilizing sand dunes and are the first found from the Manakacha Formation.

“These are by far the oldest vertebrate tracks in Grand Canyon, which is known for its abundant fossil tracks," said Rowland. "More significantly, they are among the oldest tracks on Earth of shelled-egg-laying animals, such as reptiles, and the earliest evidence of vertebrate animals walking in sand dunes."

Researchers learned from reconstructing the animal’s footfalls sequence that the animal had a very distinctive gait called a lateral sequence walk. This means that the legs on one side move in sequence—the rear leg followed by the foreleg—alternating movement with the legs of the opposite side. Rowland believes the animal was about a foot long and was walking up the sand dune at the time the tracks were preserved. The second set of tracks appear to be the same animal; however, it was moving much faster and used a different gait.

“Living species of tetrapods―dogs and cats, for example―routinely use a lateral-sequence gait when they walk slowly," says Rowland. "The Bright Angel Trail tracks document the use of this gait very early in the history of vertebrate animals. We previously had no information about that." 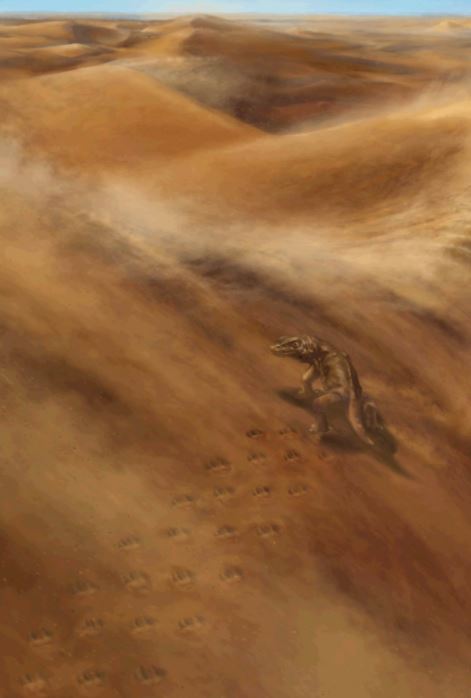 Artist's rendering of what the animal may have looked like. Art by Emily Waldman.

Rowland is currently working with the park to try and move the boulder where the tracks were found, as it still sits remarkably close to the trail and has thousands of visitors every year. The hope is that this piece of ancient history can be placed in a more controlled environment to preserve it as long as possible. The process is not simple—it would involve helicopter to life out the large boulders.

It truly is amazing when something like this is found and helps us understand how the planet worked before our time. The Grand Canyon likely has many more secrets to tell us, and one never knows when a simple find on a hike will turn out to be a piece of ancient history.  Our hats off to all involved in this remarkable discovery.