The quake was the strongest one recorded in North Carolina since 1926.

The effects of a 5.1M earthquake were felt miles away from the North Carolina-Virginia border early Sunday morning, radiating out from the epicenter near Sparta, North Carolina.

The United States Geological Survey (USGS) recorded the earthquake at 8:07 a.m. this morning, 3 miles south of Sparta with a depth of approximately 9.15 kilometers. So far, the effects have been reported as far north as Washington, D.C. 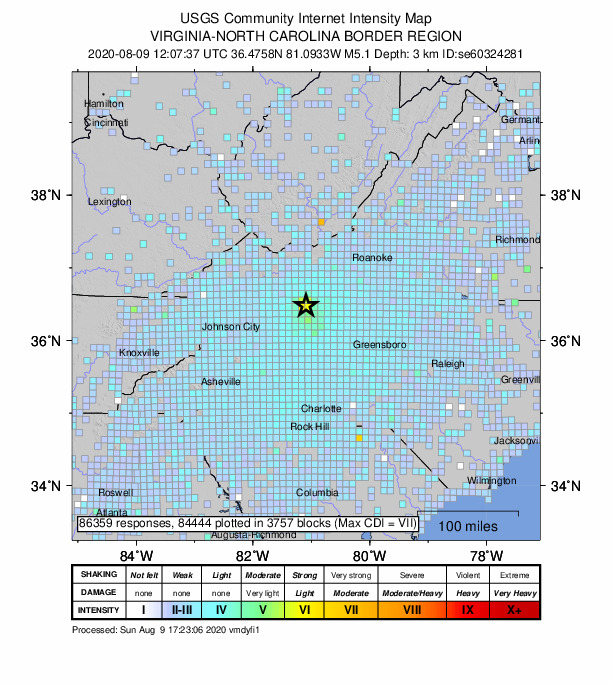 USGS attributes at least four foreshocks to the earthquake, all occurring earlier during the week and registering between M 2.1-2.6. Residents in the immediate vicinity are likely to experience similar aftershocks in the next several days.

While the earthquake is considered to be on the mild to moderate side, reports are coming in of damage around the area of the epicenter.

If you felt the earthquake this morning, make sure to report it to the USGS online.

If you felt the 5.1 Sparta, NC earthquake then be sure to submit a “Did You Feel It” report. Keep up to date on any changes at: https://t.co/VDWMntMTno pic.twitter.com/p1H4lEtgae

*The photos and graphics in this article are courtesy of the U.S. Geological Survey.

For more information about the earthquake, visit the USGS website.

Did you feel the effects of this morning's earthquake in North Carolina? Let us know in the comments!