Colorado's Drought Days Could Be Numbered

Colorado's Drought Days Could Be Numbered

The state is on target for drought-free conditions by the end of spring.

Colorado has been in pretty serious water trouble the last several years. Just last fall, more than half the state was listed under "severe drought" or worse conditions.

Thankfully, this year we saw snow, and a lot of it, especially in the mountains. March and February conditions created snowpack that was well over 120 percent of average, following a larger trend of wet weather across the nation. The National Oceanic and Atmospheric Administration reported that this has been the wettest winter on record in the lower 48 states.

Thanks to all the moisture, most of Colorado has been lowered to an "abnormally dry" status, which is technically considered free of drought conditions, with a few areas of "severe drought" still in the mix.

"Except for the western region where abnormally dry conditions are present, the remainder of Colorado saw widespread improvement, due to the recent storm and a generally very active weather pattern since February that has left excellent snowpack, with much of the north half and east returning to normal conditions," reported the United States Drought Monitor. 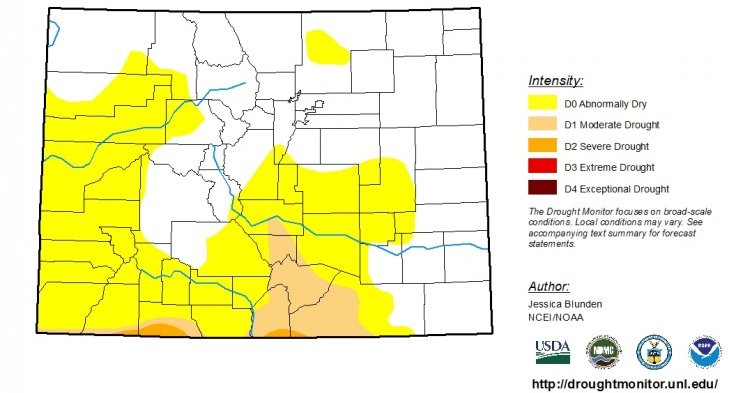 This is great news, especially for those in the southern part of the state who have been struggling with insanely dry conditions, which played an unfortunate part in many fires over the summer. It is expected that over the next weeks of spring, Colorado will officially be deemed drought-condition free, as long-range weather trends are hinting a wetter than usual spring, in addition to snowpack melt.

Luckily, this puts the state at a much-reduced risk for wildfires this summer and fall, which is a relief to many after the horrible fires we saw last year. However, if the weather warms quickly or we get warm rains too soon, it could create flooding hazards in the burn areas of last year's fires.

Early spring weather predictions, thankfully, are suggesting that won't be the case.

"Above-normal warmth is not in the cards. Cloudy conditions at times will hold back extreme heat, preventing a high frequency of those events this year," said AccuWeather Long-Range Meteorologist Max Vido.