FDA and CDC Recommend 'Pause' for the Johnson & Johnson Vaccine

FDA and CDC Recommend 'Pause' for the Johnson & Johnson Vaccine

The federal government still has enough vaccines for 600 million people without the Johnson & Johnson supply.

The U.S. Food and Drug Administration (FDA) and the Centers for Disease Control and Prevention (CDC) are recommending a pause in use for the Johnson & Johnson (Janssen) COVID-19 vaccine. The directive comes after six people experienced a rare blood clot within 13 days after receiving the Janssen vaccine. The agencies will analyze and investigate the data to determine their significance concerning the vaccine. The Johnson & Johnson vaccine has already been given to more than 6.8 million people in the U.S.

The announcement comes two weeks after Johnson & Johnson confirmed issues with the manufacturing of the Janssen vaccine at an Emergent BioSolutions plant in Baltimore. The same plant manufactures the Oxford-AstraZeneca vaccine, which is also under investigation for incidents related to blood clots. Both vaccines use similar technology.

Officials became concerned after six women experienced a rare blood clot called a cerebral venous sinus thrombosis, or CVST. This rare and dangerous blood clot requires a specific type of treatment and can become more dangerous if treated with heparin, a drug typically prescribed for blood clots. All of the women were between the ages of 18 and 48 and symptoms began between six and 13 days of vaccination. 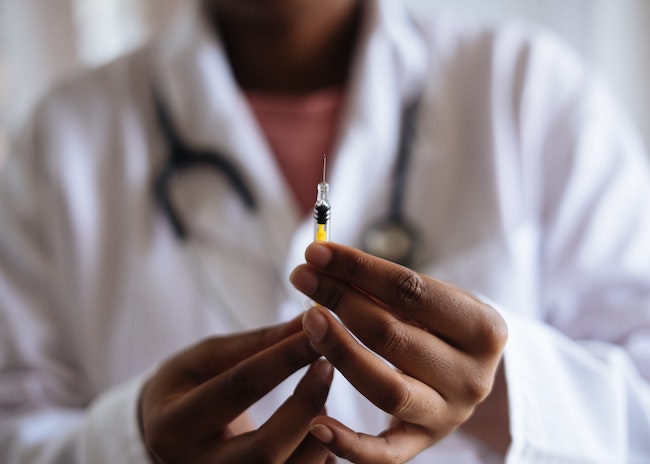 Photo by RF studio from Pexels

The FDA is not revoking the emergency use for the Janssen vaccine or removing it from the market. If you have received the Johnson & Johnson Janssen vaccine and experience a severe headache, leg pain, abdominal pain, or shortness of breath within three weeks after receiving the vaccine, call your doctor. The agencies are asking anyone who has had a similar reaction to the vaccine to report the incident to the Vaccine Adverse Event Reporting System at vaers.hhs.gov.

After the statement was issued, providers and health departments across the country began canceling appointments for the Johnson & Johnson vaccine and rescheduling patients for the Moderna and Pfizer vaccines.

In a statement from the Oval Office, President Biden said the U.S. will still have enough vaccines: "I told y’all I made sure we have 600 million doses of the mRNA—not of either Johnson & Johnson and or AstraZeneca. So, there is enough vaccine that is basically 100 percent unquestionable for every single solitary American."