226 FDNY members have died of World Trade Center illnesses in the past 19 years.

The New York City Fire Department added 27 names to its 9/11 Memorial Wall at its headquarters in Brooklyn in a ceremony that took place on September 9, two days before the 19th anniversary of the attacks on the World Trade Center. The department was forced to expand the size of the wall as deaths caused by illnesses related to rescue and recovery efforts at Ground Zero continue to grow.

The department lost 343 FDNY members on the day of the attacks. Since then, 226 FDNY members have died of illnesses related to their work at the World Trade Center. 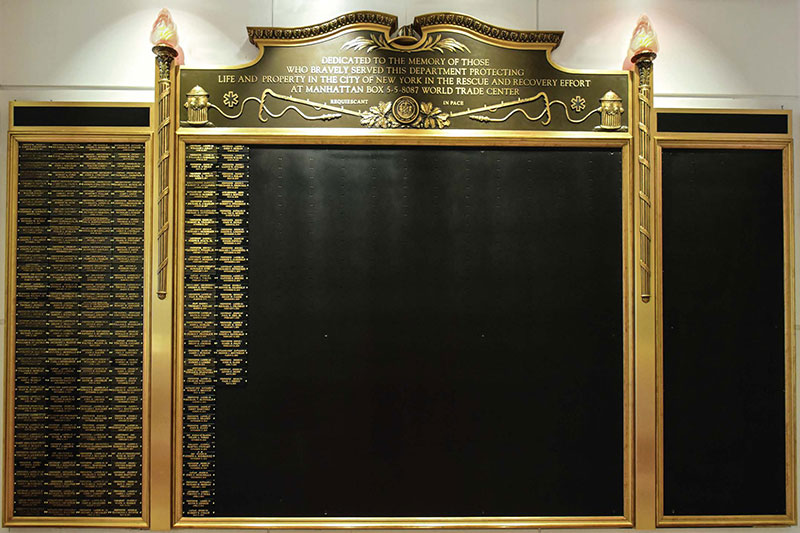 “Our Department made a solemn promise to never forget the bravery and sacrifice of the 343 members who gave their lives on September 11th, and the growing list of heroes who have died due to illnesses related to their courageous work throughout the rescue and recovery effort,” said Fire Commissioner Daniel A. Nigro. “Though we are unable to join in person this year to remember these 27 extraordinary individuals, we still pause to honor that promise by ensuring their memory lives on with their inclusion on our World Trade Center memorial wall.”

Nigro emphasized that the 27 new additions to the memorial are not simply names on a wall.

"They are brave individuals, who swore oaths to protect others," he said at the ceremony. "They are our friends and colleagues, who we have watched courageously battle against cancer and other illnesses, difficult battles that are rarely won. They have ultimately succumbed to the illnesses they acquired because they never hesitated to run into trouble to help others."

First responders who dug through the rubble at Ground Zero in search of survivors and during the cleanup effort have been found to have an increased risk of developing cancer, especially thyroid cancer, leukemia, and prostate cancer.

"September 11, 2001 had a big effect on my father. At the time, I was working on Wall Street and I remember looking for him to see if he had responded. His house wasn't called to respond that day, but he did take part in the recovery effort. He was able to describe everything and I know it took a toll on him. My father certainly enjoyed being a Firefighter. He was also a local volunteer Firefighter where we lived. Before that, he was a New York State Trooper and was also a member of the Air National Guard. He retired as a Master Sergeant after 22 years of service. This spoke to his character, he was one of those brave people. After 9/11, I decided to join the military. I was in the US Army for nine years, went to law school, and then joined the US Air Force as a lawyer. My father was proud when I joined the military and knew that it was the right choice for me. We were both dedicated to helping others and I learned it all from him. One of the moments I will always remember is my father's funeral. FDNY, New York State Troopers, his local Fire Department, and the Air National Guard were all present. It was a sight to see. It is something I will always take with me," says @usairforce Captain Luke Gilhooly, son of #FDNY Captain Dennis Gilhooly, whose name is one of 27 that will be added tomorrow to the World Trade Center Memorial Wall at FDNY headquarters, which honors those who have died of illness related to their work in the World Trade Center rescue and recovery efforts. To date, more than 226 FDNY members have died of World Trade Center related illnesses.    Join us for the virtual ceremony at 4 pm EST tomorrow, September 9, at Facebook.com/FDNY #NeverForget

View the full ceremony at Facebook.com/FDNY.

All Aboard for New Bus Trip From Delhi to London