Humpback Whale Swallows a Lobster Diver and Spits Him Out

Humpback Whale Swallows a Lobster Diver and Spits Him Out

It's a modern-day "Jonah and the Whale" tale.

Commercial lobster diver Michael Packard got lucky last Friday when a Humpback whale did not consider him a tasty enough snack. On Friday morning, 56-year-old Michael had caught 100 pounds of lobster and was already on his second dive along the coast of Cape Cod. He was almost 45 feet deep in the waters when suddenly he felt a huge bump, and "everything went dark."

Packard's initial thought—he was being attacked by a shark, but soon he realized he was not feeling any pain. "Then I realised, oh my God, I'm in a whale's mouth ... and he's trying to swallow me," he said. "And I thought to myself OK, this is it—I'm finally—I'm gonna die."

The experienced diver was still breathing through the breathing apparatus inside the whale's mouth before the giant cetacean spat him out.

"I was in his closed mouth for about 30 to 40 seconds before he rose to the surface and spit me out," Packard later wrote on social media. "I am very bruised up but have no broken bones."

Packard was rescued by his crew and rushed to Cape Cod Hospital. 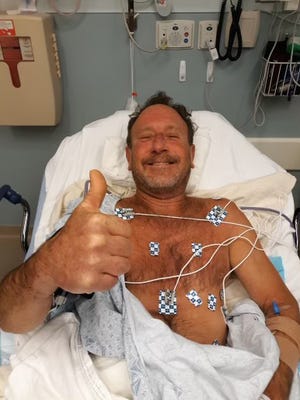 Packard's crewmate, Josiah Mayo, witnessed the whale shaking his head after swallowing Packard. A few seconds later, Packard was thrown in the air and landed on the water, floating there freely. Mayo pulled up Packard on their boat and sped back to Provincetown pier. Later, a Provincetown fire department ambulance admitted the injured diver to the hospital.

According to marine biologists and scientists, such human-Humpback encounter is rare. Humpbacks are harmless to humans and mainly feed on fish like a sand lance.

"Based on what was described, this would have to be a mistake and an accident on the part of the humpback," said Jooke Robbins, director of Humpback Whale Studies at the Center for Coastal Studies in Provincetown. Humpbacks often do "lunge-feeding" where they try to swallow a large amount of food by moving fast. "When they do that, they don't necessarily see everything," said Robbins.

Packard had suffered soft tissue damage but plans to return to his job as soon as he heals. However, this is not the first time Packard had a close encounter with death. More than 10 years ago, Packard had survived a plane crash in Costa Rica. He suffered life-threatening injuries while the pilot, co-pilot, and another passenger were killed in the accident.

Packard is a licensed diver with 40 years of experience. He loves his job, and as Josiah concluded, Packard will be back to diving sooner, probably within a week!

What do you think of Packard's incredible story? Have you ever heard of or witnessed such rare encounters? Tell us in the comments.