Tragedy has continued in 2020 with the passing of “Double Rainbow Guy.”

"Double Rainbow Guy" Paul Vasquez, known as "Bear," left a mark on the world with his untimely passing. During his life, Bear spread a message of hope, inspiration, and love through his many YouTube videos that documented his adventures on his quiet mountain. 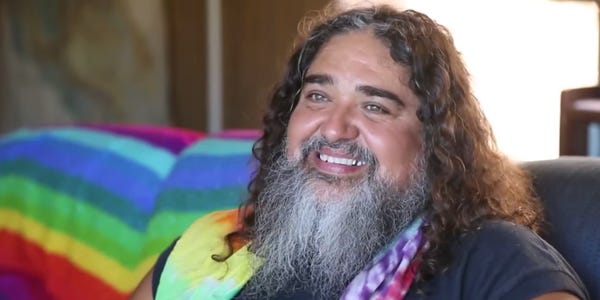 On Saturday, the Mariposa County Coroner's Office in California confirmed that Vasquez died at the young age of 57.

Known for the iconic “Double Rainbow Guy" video which first surfaced in 2010, Vasquez captured the hearts of Americans with his raw and unfiltered reaction to seeing a double rainbow appear in the sky.

The low-quality, shaky video is set in the beautiful landscape of Yosemite outside of his modest trailer.

“Woah. Double rainbow, oh my God," Vasquez says during the three-and-a-half-minute clip. "It’s a double rainbow all the way.”

He whispers in awe for several seconds before screaming out in excitement and then describing how bright and vivid the rainbow is. At the end of the video, Bear is overcome with joy, and you can hear his elation in the sobs that escape his lips.

Within days of sharing his video with the world, Vasquez became a viral sensation. He entertained countless late-night show interviews, commercials, and news spotlights. While his newfound fame came with the opportunity to rack in some serious money, Vasquez is remembered for passing up on some lucrative ad opportunities:

“You can’t put ads on God," Vasquez said. "Here's my heart; here’s my best thing that I ever made and you can have it for free.”

Vasquez's simple and honest approach to life resonated with many people around the world. He hunted his own food and lived off the land in a way that was respectful and appreciative of nature. His outlook on the world was one full of hope, gratitude, and connection with nature.

In 1985, at the age of 22, Vasquez moved to a cozy home on the side of the mountain in Yosemite National Park. Having lived a life as a firefighter in East L.A, he took on a variety of roles in the national park and decided to live on the mountain permanently.

Life in the wilderness took an unexpected turn last year when a tree fell on his home and destroyed it. With the help of his ex-wife and two adult children, he moved into an apartment.

Although his passing is untimely and deeply saddening, Vasquez's videos that were left behind will always serve as a reminder of what a gentle giant he was. Through his love and passion for creation, the world certainly is a better place.