Police Dept. Tweets 'Protesting Is a Non-Essential Activity' and the Internet Has Questions

Police Dept. Tweets 'Protesting Is a Non-Essential Activity' and the Internet Has Questions

The Raleigh Police Department is under fire for a tweet that said that "protesting" falls under non-essential activities.

Approximately 100 ReopenNC protestors gathered in downtown Raleigh, North Carolina, on Tuesday to show their disapproval for the state's stay-at-home order continuing past April 29. Both the State Capitol Police and the Raleigh Police Department were on-site to monitor the situation. One protestor was arrested.

We are aware of the #ReopenNC protest that is occurring in Downtown Raleigh on Wilmington and Jones Street and are monitoring the situation. 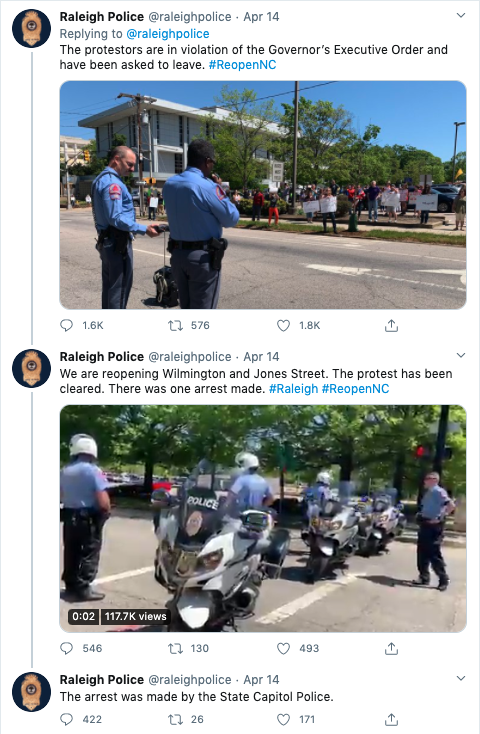 When someone asked what part of the governor's order was violated, the police department was quick to respond: 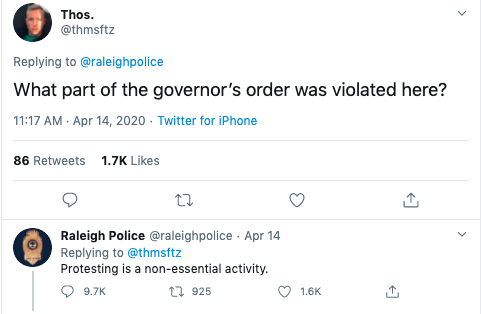 "Protesting is a non-essential activity."

Well, that didn't go over too well:

"Congress shall make no law respecting an establishment of religion, or prohibiting the free exercise thereof; or abridging the freedom of speech, or of the press; or the right of the people peaceably to assemble, and to petition the government for a redress of grievances."

So you are effectively stating, for the record, that the exercise of first amendment rights is "non-essential." Thank you for clarifying that. Better start making notes for when you are taken to court.

Protesting IS an essential activity when government violates their authority and the police obey unconstitutional orders instead to the oath of office they GAVE THEIR WORD to uphold.

And, of course, there were people on both sides of the issue:

I'm well aware of the freedom of speech encompasses, thank you.
If what they are doing (protesting in this case) puts others at risk however, that creates a grey area in which each individual will interpret it differently.
This is clearly a prime example of that.

You idiots who want to #ReopenNC are part of the problem.

If we reopen now, we will just have to shut everything down again in a month.

And cost thousands of lives in the process.

Buckle up, buttercup. We will be locked down until there’s a vaccine.#TheResistance

The cases of people with Coronavirus topples to almost 5,000. Our healthcare workers are overwhelmed and y'all want to reopen NC? THE IGNORANCE #ReopenNC

The Raleigh Police Department responded to the criticism with an official statement:

The Raleigh Police Department has issued a statement in response to the earlier tweet regarding protesting and the Executive Order. pic.twitter.com/mg4laUpFIk

The lines are starting to feel a bit blurred, are they not?

There's a dangerous global pandemic. We've been advised that we shouldn't gather in groups so as to not unknowingly spread the virus. But as Americans, we have Constitutional rights that guarantee we can peaceably assemble and speak our minds. So if Americans don't agree with a government-issued order to stay at home (pandemic or no pandemic), does their right to assemble and express their disapproval supersede the mandate from the authorities?

Or, do public health concerns outweigh the right to protest, at least temporarily?

It's getting dicey, and there are multiple issues at play here. We'd love to hear your opinion in the comments!