Study: Americans 'Dramatically Misunderstand the Risk of Dying From COVID-19'

Study: Americans 'Dramatically Misunderstand the Risk of Dying From COVID-19'

One researcher calls the results "nothing short of stunning."

For the average person, trying to find truth in the midst of the COVID-19 pandemic may be one of the most difficult aspects. With so much media and social media hounding one's brain from every side, it can be challenging to sift the truth out of all the exaggeration, the understating, and all the flat-out lies. And the beliefs that we end up with (whether from truth or falsehoods) have the power to determine our behavior and, thus, the policies and decisions and entire trajectory of our future.

So obviously, finding the truth is of utmost importance.

That's why investment group Franklin Templeton and analytics firm Gallup teamed up to do a research study on Americans' behavioral response to COVID-19.

"We launched this joint project to gain a deeper insight into people’s behavioral response to the pandemic, because we believe it will play a crucial role in shaping the economic recovery," Sonal Desai, Ph.D. says. "Our first round of polls has already yielded surprising insights that raise some concern for the outlook, but also highlight important calls to action."

1. "Americans misperceive the risks of death from COVID-19 for different age cohorts—to a shocking extent."

Early on, it was pretty well-known that the virus seemed to be deadlier for the elderly, but as the pandemic has progressed, people now tend to believe that the risk is just as great for the young as it is for older people.

These are the types of misconceptions that have an effect on bureaucratic decisions, such as whether or not schools should reopen for in-person learning. 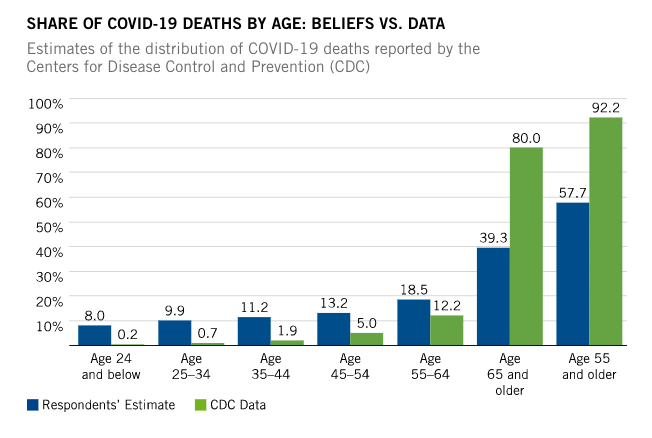 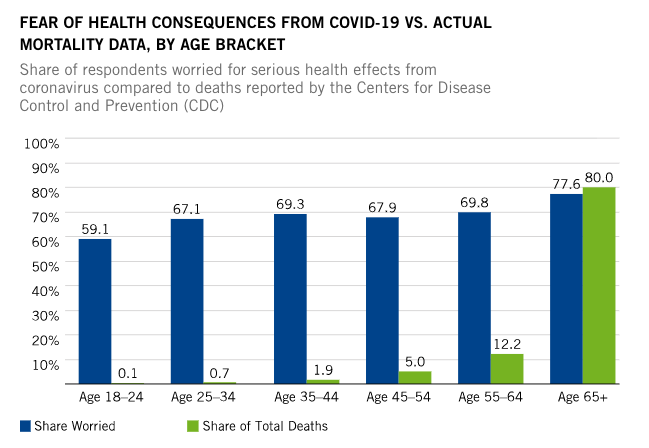 2. "The misperception is greater for those who identify as Democrats, and for those who rely more on social media for information."

The study shows that social media is distorting information, thereby leading people's beliefs astray. That makes sense, since we often see alarming stories circulating Facebook and Twitter, and those rare, sensational-type cases are the ones we're drawn to reading and resharing.

In addition, it's not helping anything that we're in the middle of an election year:

"Stories that emphasize the dangers of the pandemic to all age cohorts and tie the risk to the Administration’s handling of the crisis likely tend to resonate much more with Democrats than Republicans. This might be a contributing factor to why, in our survey results, Democrats tend to overestimate the risk of dying from COVID-19 for different age cohorts to a greater extent than Republicans do."

Also, the same information could be presented two different ways and against two different comparisons and manage to produce two opposite reactions. Note, how, the same metric for Florida is presented against Texas in the first graph and then against New York in the second. There's nothing wrong about the information being presented, but because of the way it's being presented, the first graph makes Florida look like it's way worse off than it actually is.

As journalists, we find this particular piece of information fascinating; the media holds such power over an audience.

3. "We find a sizable 'safety premium' that could become a significant driver of inflation as the recovery gets underway."

Finally, because of their beliefs about the virus, it was found that people are likely to take financial measures to keep themselves safe in the future. This type of behavior could affect inflation down the road and have implications on inequality. 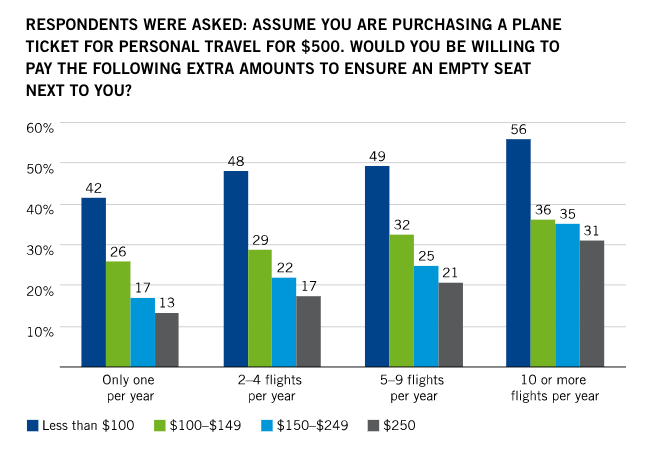 "A prolonged recession would depress incomes and demand, but a combination of bankruptcies and safety requirements might cause a corresponding cut in supply," the report says. "If those who can afford it are willing to pay significantly more for extra perceived safety, we might see a significant rise in inflation down the line. And, higher inflation would further exacerbate the rise in inequality caused by the recession."

In the report's conclusion, Dr. Desai urges the public to make a priority of seeking and providing more fact-based information.

"It is shocking that six months into the pandemic so many people still ignore the basic mortality statistics, with perceived risk driven by political leanings rather than individual age and health," Dr. Desai says. "Misperceptions of risk distort both individual behavior and policy decisions."

We encourage you to read the full write-up of this first round of findings. There is much more than we had space to include and summarize here, but we believe all of it is worth reading.