Juggling work, parenting, and remote schooling is no easy task.

A recent survey by Sittercity and One Poll dug into the reality of what parents and kids are going through during the COVID-19 pandemic. The survey, Back to School by the Numbers, looked at 2,000 American parents who have school-age children.

Some of the trends that the study highlighted go both ways, with parents interrupting kids and kids interrupting parents during meetings and remote schooling. On average, the data shows that on any given week, your typical American child will interrupt their parents' online meetings, phone calls, and digital board rooms at least 25 times. Many of these interruptions include things like snack requests and Wi-Fi resets.

*New Rule: If my kids interrupt the Zoom meeting. They must sit and stay for the whole thing. #gamechanger

It's not just kids doing the interrupting either. What is presumably with good intentions, parents have disturbed their child's remote learning at least six times since the school year has started. 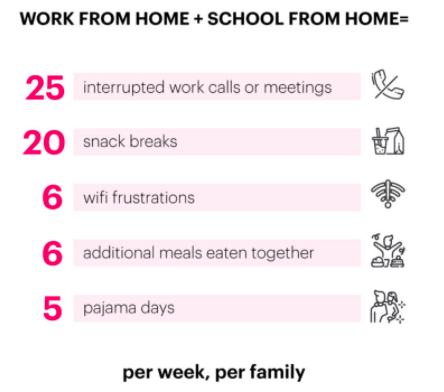 The Stressors of Childcare

Because school plans have changed multiple times throughout the first quarter of fall schooling, one of the biggest issues that more than half of parents identified was childcare. The average parent noted that their child's school has already gone through at least four different plans of action on how safely start the new school year. Every time plans change, parents are left trying to piece together a new childcare solution for school's off-hours, whether that's with one parent working from home, hiring a babysitter, or accepting assistance from relatives. However, 70 percent of parents who work from home said they would normally have an older relative watch their children, but with the risk of COVID-19 specifically among the older population, that option is out of the picture.

Overall, parents feel overwhelmed. Between trying to focus as they work from home, encouraging their children to do remote learning, and even offering assistance when needed, the constant changing of hats is becoming taxing on the average American. Unsurprisingly, the survey highlights that women are impacted more than men when it comes to workflow interruptions because they are generally seen as the primary caregiver. As a result, women are seeing an overall decline in their work hours.

Some Other Interesting Takeaways From the Survey Include:

One of the biggest takeaways the study highlights time and time again is that this unique situation of remote working and remote learning has given families the ability to spend quality time with each other that they had never had before. And it's clear families are embracing that as 91% of parents hope this quality time continues.

With commutes eliminated and time being spent more efficiently when working from home, there remains opportunities or bonding with family members that necessarily didn't always exist. Plus, if families are averaging out five pajama days, isn't that the best silver lining of them all?

As previously discussed, one of the major issues the survey highlighted was childcare. It's become clear how dependent parents are on the education system for childcare of their school-aged children. With brick and mortar education taken out of the picture, many families have been thrown for a loop as far as continuing with their work responsibilities without having another adult in charge of their child during that time.

Overall it's clear that parents are struggling to juggle remote schooling, working from home, and all the other demands that being a parent comes with. If you are working from home with children in the house, let us know how this pandemic has changed your daily activities. Let's get the conversation started in the comments!