The Buzz About 'Murder Hornets': What You Need to Know

The Buzz About 'Murder Hornets': What You Need to Know

There's been a lot of buzz going on lately about the arrival of 2-inch long insects known as "murder hornets", aka the Asian giant hornets (Vespa mandarinia).

According to researchers from Washington State University (WSU), sightings of the invasive flyer started last December—the first time this aggressive species has been seen in the United States. It's not clear how the species traveled to the states, as it's not native here. There's a possibility they came in on international cargo, states WSU. 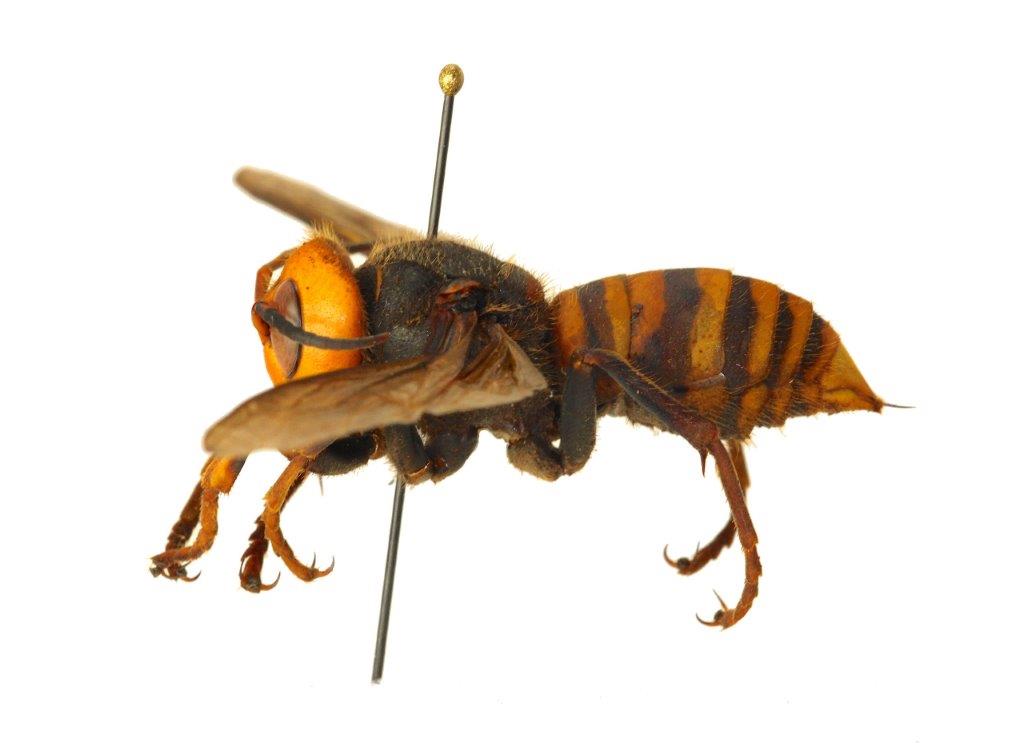 This species has the potential and ability to wipe out our bee populations, which already are diminishing due to disease, pesticide, and threats to their natural habitats. Murder hornets will devastate a beehive in short order, literally biting the heads off the adult bees then eating the young. They can attack and kill entire bee colonies in just a few hours, lending to the name of "murder hornet."

And honestly, the face on this thing is mean, with its large bright-yellow face, spiked teeth, and huge cartoonish eyes. The hornets can fly extremely fast, too, up to 20 miles per hour. (Yikes!)

Fortunately, the murder hornet hunts bees, not humans or pets; however, that doesn't mean we're off the hook. The venom in these giant hornets is far more powerful than a normal bee sting, and they'll attack if provoked. This is rare, but it does happen, with up to 50 people each year in Japan being killed, according to The New York Times. Anyone allergic to regular bees or wasps should not approach one of these, as the results could be horrific.

You can watch Coyote Peterson of Animal Planet demonstrate what happens after a murder hornet stings, an experience he describes as ”excruciating".

The hornet nests in the ground in large colonies and their life-cycle starts in April when the queen wakes up from hibernation. She will send out her scouts to find a place for a new nest and look for food. These hornets have the capacity to secrete a special scent near a target, leading the other hornets. The murder hornet is most threatening in late-summer to early-fall, typically around July through October.

Officials in Washington state have already set out traps to try and catch any queens that may be out there, though it's not likely that will happen, as there are far more worker hornets than queens. Scientists and officials there are working to hunt out any specimens, and stop this species from establishing itself in the U.S.

“This is our window to keep it from establishing,” said Chris Looney, an entomologist at the Washington State Department of Agriculture. “If we can’t do it in the next couple of years, it probably can’t be done.”

If you happen to see one, it's best to call in a professional instead of dealing with it yourself.

"Don't try to take them out yourself if you see them," says Looney. "If you get into them, run away, then call us! It is really important for us to know of every sighting if we're going to have any hope of eradication."

Anyone who sees one is asked to report an Asian giant hornet sighting, contact the Washington State Department of Agriculture Pest Program at 1-800-443-6684, pestprogram@agr.wa.gov, or online. If you're not in Washington, please contact your state's department of agriculture.

Personally, we could do without homicidal insects. What do you think about the murder hornets? Sound off in the comments below.