You thought it was all over, didn't you? Not quite yet. Here's a timeline of what's next.

When it comes to the presidential election, a lot more goes on after Election Day than you might think. It's not happening behind the scenes exactly, but it goes much further than us just filling out a ballot and calling it a day. We always hear about the Electoral College, but where do they come from and what do they do, exactly?

Plus, we always hear how the Electoral vote may not match up with the popular vote. What's up with that? Let's break it down a bit and talk about how the Electoral College works today and what will be going on in the days leading up to the Inauguration.

Simply put, the Electoral College consists of an elector for every member of the House of Representatives (435) and the Senate (100)—plus three for the District of Columbia. This brings us to a grand total of 538 electorates. So that's the reason you kept hearing about the magic number 270 during the week of the election; 270 is the lowest amount of votes that make the majority.

Every state is assured at least three electorates in an attempt to level the playing field for states with smaller populations and, thus, only one congressperson. More on that later. For now, let's focus on what has happened since Election Day and the road to Inauguration Day.

Election Day: The first Tuesday after the first Monday in November. Sounds like the beginning of a prophecy in a fantasy novel, doesn't it? I would say that we can all agree on when Election Day takes place, but with all of the mail-in voting, absentee ballots, and early in-person voting that has happened in this unprecedented 2020 election, some think the line is a little fuzzy. But rest assured, Election Day is Election Day, and the counting begins, which leads us to ...

Even in a normal election year, the votes are not done being counted the night of Election Day. There are the time zones to consider, as well as absentee voters in the military, college, and what have you. All of the mail-in ballots must be postmarked by Election Day (November 3, this year), but the deadline for when they can be received varies from state to state. In many states, the ballots must be received within a day or two of Election Day, but Washington state, for example, has the latest deadline—November 23.

A week after Election Day, states certify their results. Again, the process varies from state to state, but the deadline is mostly in the last two weeks of November (unless a recount is necessary). Regardless, the states are mandated to have their results by December 8, unless they're on "California Time." California has until December 11.

This is the “Safe Harbor” date in 2020—six days before the electorates meet and vote. The Safe Harbor date was established in 1887 with the Electoral Count Act, but we'll get to that later. In theory, by the Safe Harbor date, the dust has settled, disputes have been cleared up, a winner has been declared, and electors are chosen. How are electors assigned, you ask? That also depends on the state legislature, so it varies. Governors then create Certificates of Ascertainment that list the winner of the election and the slate of electors. The original certificate is sent to the Archivist of the United States, and six copies are given to the electors when they meet.

Interesting side note: if you don't remember the election from 2000, you've certainly heard about it by now. The Supreme Court ended a Florida recount because it wasn't going to be completed by the Safe Harbor Date. Now, as pointed out by CNN's Zachary B. Wolfe, that particular recount wouldn't have changed the outcome of the election, but Florida as a whole played a major part in that race, and the Safe Harbor Date was partially involved.

The first Monday after the second Wednesday in December. Sure, it sounds like a time frame set up by Dr. Seuss, but it's an actual thing per the Electoral Count Act of 1887. This calendar year makes it December 14. Electors meet in their states at locations determined by the legislature and cast their vote for U.S. president and vice president. The results are counted and filed as six documents signed by the electors (Certificates of the Vote) and then paired with the six Certificates of Ascertainment from the governor. Signed, sealed, and certified (again) they are sent by U.S. Mail. Three of the six certificates are sent to officers of the state the electors met in; two certificates go to the Archivist; and one certificate goes to the vice president who, as you may or may not know, is President of the U.S. Senate.

The deadline for the votes to get to the Senate (nine days).

Members of the House of Representatives and new members of the Senate take the oath of office at noon. This is the official start of the 117th Congress. 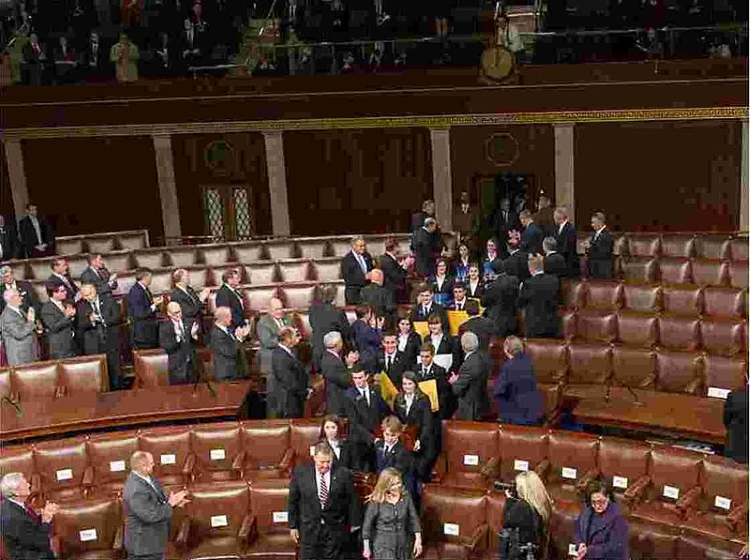 Electoral votes are finally counted! The President of the Senate (that's the vice president, remember?) listens to the votes, declares a winner, and listens for objections. Objections must be presented in writing and must be signed by at least one senator and one representative. If objections are made, the joint session is suspended and resolved separately by the House and Senate. Both houses must agree to the objection or it fails and the vote (or votes) are counted.

Just so you know, if neither candidate gets 270 votes, the 435 members of the House decide the election. Each state gets a vote, and it requires a majority of state votes to become president. The House of Representatives would have until noon on January 20 to make a decision; if they can't, it would go to the Vice President or the next eligible person in line.

Inauguration Day—Assuming there haven't been any hiccups or inability by the House to make a decision, a new president takes the oath of office at noon.

I know, not exactly. It's not really that bad, but it can take a bit to wrap your head around it. And there sure seem to be a lot of seemingly arbitrary steps, hoops, and hurdles. So, more to come on that!

Did you get all that? How does your state handle the Electoral College process? Let us know in the comments!