Half the US population lives in 143 counties out of 3,143 counties or their equivalent (2019 American Community Survey)
Mike Burnette 11/20/20
Join the Community
shares

Did you miss Parts 1 and 2? Check them out here and here.

In an attempt to maintain some consistency in presidential elections, the Electoral Count Act came up with a whole lot of rules. Some were very specific and some used much broader strokes. The Electoral College was, itself, a compromise in determining how elections would be run so it should come as no surprise that the concept came under fire almost immediately.

John Burgess said in his magazine Political Science Quarterly that the Electoral Count Act was “very confused, almost unintelligible” in 1888. This was just the year after it had been introduced and coming from the guy who is considered to be the granddaddy of political science (he was also an outspoken racist, so...yeah). It's been labeled “contradictory” and that it “invites misinterpretation.”

Although you only hear about it every four years or so during an election, the Electoral College is still a pretty divisive subject. It hasn't really changed much in over 100 years so let's take a look at arguments for and against it.

As everyone from CNN's Zachary B. Wolf to HBO's John Oliver will tell you: changing the Constitution is hard and it takes a very long time. One could argue that the reason the Electoral College has stuck around so long is simply because of its age.

Of course, it's more complicated than that. Part of the purpose of its creation was to keep a balance throughout the country when choosing its future leader. Areas more heavily populated or metropolitan are going to have different needs than less dense, rural areas—politically speaking. Politicians who want to keep the Electoral College intact may represent smaller states and fear that their "voice" would be drowned out by states with more people living in them.

Another thing to consider is just how close some elections are. There were talks of recounts early on in the 2020 election but there have been many elections that have been much closer in the past. Imagine having to take a recount on a national level. Do you think this year has been bad and taking a while? This would be nothing compared to that. And who knows when results would even be available ... of course, if the Electoral College were eliminated who knows when the deadlines would be? 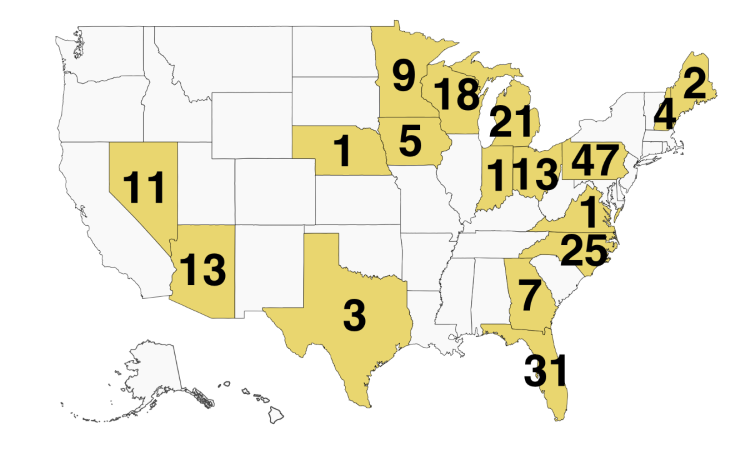 Number of campaign events from August 28-November 3, 2020 by state (FairVote)

Some opponents of the Electoral College feel that if you don't live in a “swing state,” then candidates won't pay any attention to you. Certain states are considered “safe” for either party—Texas, for example, votes predominately Republican although it has Democratic districts and holds 38 Electors. California, on the other hand, mostly votes Democratic despite its Republican districts and has a whopping 55 electorates.

A “swing state” is just that—it could go either way. The swing states change over the years and there's no reliable way of predicting what the next "battleground states" will be. The concern is that the campaign trail of presidential candidates will virtually ignore the states they may already consider "safe." In an article featured in The Nation, Karina vanden Heuvel claimed that “four out of five voters” throughout the nation “would be absolutely ignored.” It makes sense that politicians would only focus their money and attention on states that could make or break the election for them.

The rest of the opposition is a little easier to explain because, on paper, it looks pretty simple. Many believe that the overall popular vote should be the only one that matters, cut out the middle man, and let each person's vote count towards the outcome. This would also negate the threat of “faithless electors”

Electors that represent a state pledge to vote according to the state's popular vote. Again, this is supposed to simplify the counting process. Perhaps obviously, “faithless electors” don't go through with their promise and change their vote when the Electoral College meets. It ranges from voting for another person entirely or just not voting at all-the passive/aggressive equivalent to "rage-quitting" in multiplayer video games. This has not directly altered the outcome of any election but it's happened 165 times as of 2016 and we have about a month to see what happens on December 14. The punishment for an act of faithlessness varies from state to state and can be serious or nothing at all.

The argument against the Electoral College really gained some traction in 1969 when Representative Emanuel Celler proposed to end the Electoral College and instate a popular election that required a 40% minimum. An independent candidate had won a surprising amount of electoral votes and stirred up some concern about contingent elections and vote trading. The motion passed in a landslide at the House but was eventually filibustered in the Senate until it fell to the wayside after the term of the 91st Congress was over.

It happened again in 1979 after another close election between Jimmy Carter and Gerald Ford. Senator Birch Bayh also wanted to replace the Electoral College with a direct election, this time failing in a 51-48 vote. Due to that not passing, the House decided not to even try.

Since then there's been less talk of eliminating the Electoral College as a whole but rather finding ways around it. Some states have agreed to split votes or use them following the national popular vote. The latter has come to be known as the National Popular Vote Interstate Compact and currently includes 15 states plus the District of Columbia. The plan is to only use the Compact if it will guarantee that the nationally popular candidate would become the winner. Other states could join but as it stands right now, the Compact makes up 36% of the Electoral College and 73% of that magic number 270 that is required to win. However, since that is an unprecedented move and some of the details are a little fuzzy, chances are pretty good that there would be some legal attacks if it ever came to that.