The Measles Epidemic Is Spreading, and Some Adults May Need a Booster

The Measles Epidemic Is Spreading, and Some Adults May Need a Booster

Depending on your age, you may need a booster to guard against measles.

America is in the midst of the largest measles outbreak in 25 years. As of April 19, 2019, the Centers For Disease Control and Prevention (CDC) had recorded 704 cases, with the highest concentrations in Washington, New York, and Michigan.

The disease had been eradicated in 2000, but the increasing number of parents opting not to have their children vaccinated has resulted in a resurgence of the contagious illness. Now the CDC is recommending that some adults get a booster.

Which Age Groups Are Affected?

On a call with reporters on April 30, Dr. Nancy Messonnier, director of the CDC’s National Center for Immunization and Respiratory Diseases, said most adults have immunity. However, there are two groups of people that may require a booster.

Should I Get a Second Dose?

Dr. Messonnier says the CDC is recommending a booster for adults in these groups who have a higher risk of contracting measles. That includes people traveling internationally, college students, and people living in communities that are currently experiencing an outbreak. If you think you might need a second dose, consult your healthcare provider. 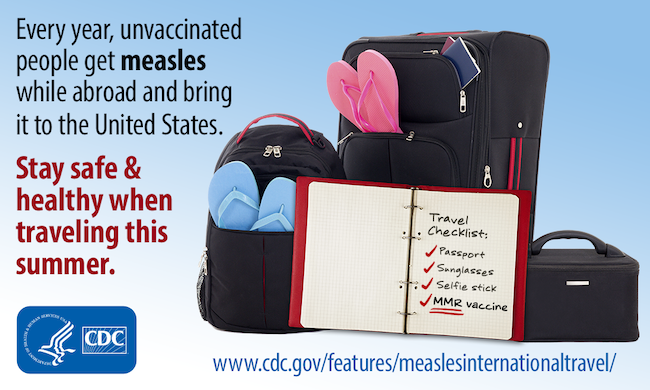 Measles starts with a fever (up to 105 degrees), cough, runny nose, watery eyes, and sore throat. A rash will break out three to five days after symptoms start. Measles is highly contagious and can be very serious. One out of four people who get the disease will be hospitalized. Contact your doctor as soon as you notice the symptoms.

Do you think you need a booster? Have you had experience with this latest measles outbreak? Tell us in the comments!