With graduation parties right around the corner, this global helium shortage is going to be felt all over the country.

Having a party? Get some balloons! You don't really think about where the helium comes from ... until there isn't any. I stumbled on this story just today, as I was trying to buy some balloons for a work function.

The first Dollar Tree I went to had this sign on the front door: 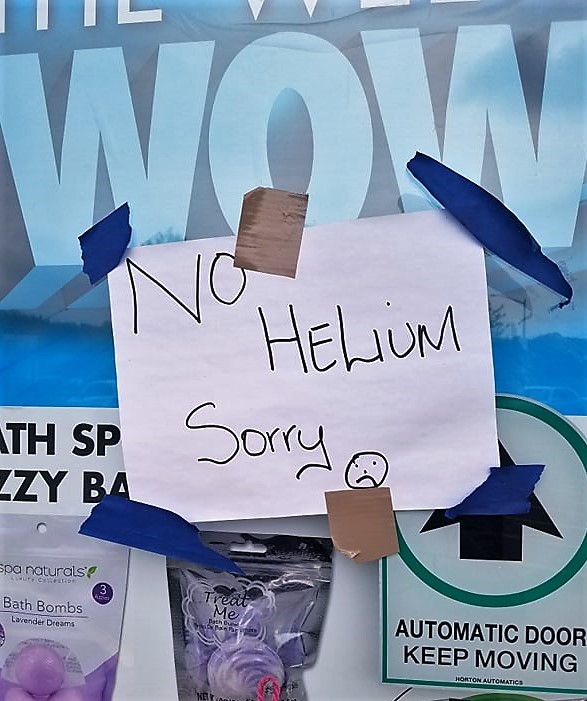 Oh, weird. Okay. I got in my car and drove a few minutes away to the second Dollar Tree in town. This is what greeted me at the cashier's station: 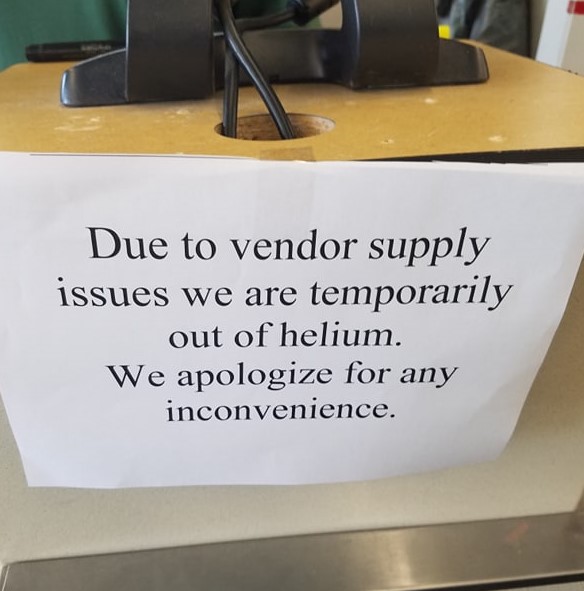 Okay, even weirder. After calling a coworker and doing a bit of Googling, I realized it wasn't just limited to my town or even just my state. Turns out, helium is in short supply everywhere. I mean, EVERYWHERE. How could this happen?

Simply put, helium isn't created and stuffed into balloon tanks. It's a natural resource that is mined and contained, just like coal or petroleum. According to a Party City statement, only three main producers supply the entire world's helium.

When there is a shortage, suppliers generally bounce back eventually. Unfortunately, helium is not only used in party supplies; it is also used in medical devices, electronics, and even in research.

Low helium supply has even affected Party City's bottom line. On May 9, the company announced that it will close 45 stores due to low-profit margins.

“This year, after careful consideration and evaluation of our store fleet, we’ve made the decision to close more stores than usual in order to help optimize our market-level performance, focus on the most profitable locations, and improve the overall health of our store portfolio,” James Harrison, Party City's CEO,  said in a statement.

What can I do in the meantime?

Party City has some great ideas for how to decorate without helium-filled balloons. Consider ordering a balloon arch or creating your own clusters of colorful balloons tied to railings or taped to doorways. Maybe now is the time to get your creative streak going with streamers!

You may still be able to find working helium tanks in other places like big grocery stores – my local spots just ran out over the weekend. Save yourself the aggravation and call the floral department before you head out, though!

Have you been affected by this global helium shortage? What did you do instead? Let us know in the comments!

5 Videos You Have to See This Week: A Marine Catches a Baby From a Burning Building, and More

VIDEO: Bear Lunges Toward Woman When She Tries to Take Pic With It