Total Lunar Eclipse (and a Super Moon) Happens May 26!

Total Lunar Eclipse (and a Super Moon) Happens May 26!

Total eclipse will be most visible to those west of the Mississippi.

May is the home of some really astronomical happenings. Earlier in the month, the Eta Aquarids meteors made their appearance, producing up to 30 meteors an hour (did you see any?).

But the main event of the month is something that we haven't seen in about two years!

This month's full moon will occur on May 26, known as the Flower Moon, as it occurs during the time flowers bloom. It also happens to be the second of two "Super Moons" this year.

A supermoon occurs when the Earth is closest to the moon’s perigee, which is the closest point of its orbit to Earth. This results in a huge-appearing moon hanging in the sky to dazzle us all, appearing around 16% brighter than an average full moon, as well.

And while the big, bright moon in the sky is something to see, it isn't the coolest thing the sky has in store for us that night.

The Super Flower Moon this year is also a "Blood Moon!" This means that this month hosts a total eclipse of the moon, making the moon appear reddish in hue once it passes through the Earth's shadow. Hence, the "Blood Moon" moniker.

Put it all together, and we have a fairly rare occurrence: a Super Flower Blood Moon!

Because it occurs in the morning hours (and too close to sunrise for some to see it), the lunar eclipse will best be seen by those in the western part of the U.S. Hawaii will get a pretty impressive view of it in the sky, while those on the West Coast will see it best a few hours before it sets. Those in the eastern U.S. should still be able to enjoy a partial eclipse before the sun makes its appearance.

According to meteorologists, the moon is expected to enter the penumbra at 4:46 a.m. EDT (the region of partial shadow where the moon is only partly dimmed by the Earth's shadow), and the umbra (the total shadow blood moon appearance for those who are in the right areas) at 5:45 a.m. EDT. It is expected to leave the umbra at 8:53 EDT a.m. and penumbra at 9:51 a.m. EDT.

You can check out your ability to see the eclipse in the below image from TimeandDate.com. Check out the entire interactive world map here. 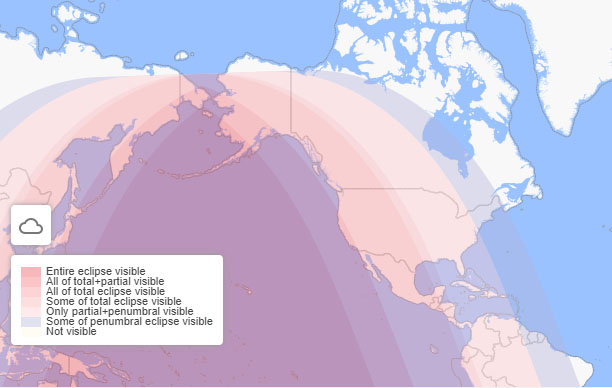 Of course, the Super Flower Moon part of the event can be enjoyed by everyone! Happy viewing!