Virginians will want to pay attention to the latest named tropical storm to form this year.

Tropical Storm Isaias officially formed Wednesday night, and its current trajectory could have the potential hurricane in Virginia by early next week, according to meteorologists tracking the storm.

That’s a change from previous predictions that had the storm heading toward the Florida Panhandle and Alabama, Patch reports. Much of the East Coast could feel the effects of the storm if it moves along Florida as predicted by the National Oceanic and Atmospheric Administration.

It could even form into a category 1 hurricane by the time it reaches Virginia, according to some models. 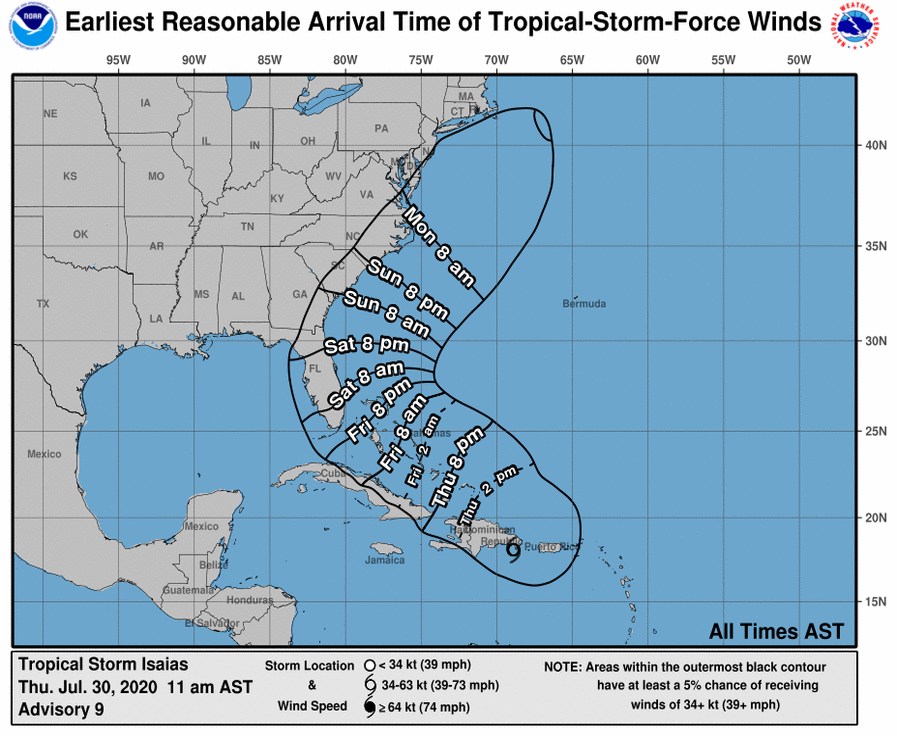 This map from the NOAA shows the potential trajectory and timeline of Tropical Storm Isaias. Courtesy NOAA.gov

Virginia has endured dry conditions for most of the year, so the potential rainfall may be welcomed in areas north and west of Richmond that are particularly dry, according to reports from WWBT, which predicts rainfall starting Monday through Wednesday of next week.

And in case you’re struggling to pronounce this storm, a National Weather Service representative created this video to help you out.

The next storm name in the Atlantic Hurricane Season will be... #Isaias (pronounced [ess-ah-EE-ahs]. Here is a short video of how to properly pronounce it. #Spanish pic.twitter.com/g60ckwOLS6

Because the storm could change trajectories before then, local meteorologists are urging Virginians to keep up with the latest updates about Tropical Storm Isaias. Follow NOAA's National Hurricane Center for the latest information as well as useful safety tips in case this storm does eventually become a hurricane.

How to Pronounce 'Isaias,' the Tropical Storm Hitting the East Coast

Popcorn-Flavored M&M's Are a Thing, and They're Apparently 'Buttery'