The CDC says that life expectancy fell by a year and half.

With the Delta variant invading all corners of the United States, the U.S. Centers for Disease Control and Prevention (CDC) has some more shocking news for the nation. In 2020, life expectancy in the United States fell by a year and a half to 77.3 years. This is the lowest level since 2003 and the steepest one-year decline since World War II when the rate fell 2.9 years between 1942 and 1943.

"Life expectancy has been increasing gradually every year for the past several decades," Elizabeth Arias, a CDC researcher who worked on the report, told Reuters. "The decline between 2019 and 2020 was so large that it took us back to the levels we were in 2003. Sort of like we lost a decade."

CDC attributed about 73.8% of the decline to deaths from the coronavirus pandemic. The agency stated that drug overdoses were also a major contributor. According to CDC's National Center for Health Statistics, deaths from drug overdoses in the United States rose 30 percent in 2020. 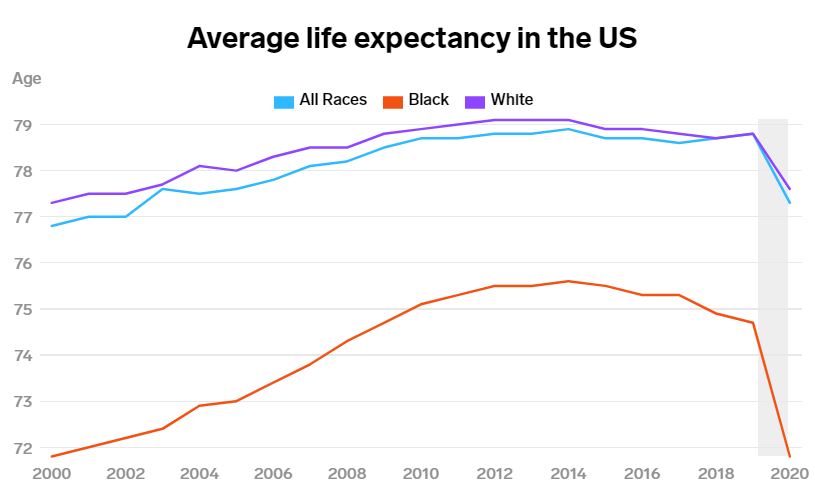 The CDC released provisional data earlier this year that stated the death rate rose by 15.9% from 2019 to 2020, increasing from 715.2 to 828.7 deaths per 100,000 people. According to the report, coronavirus was the third leading cause of death in the United States during 2020. Heart disease and cancer were the first and second leading causes of death, respectfully.

The decline in life expectancy over the past year would have been larger based on CDC's research if it were not for a decrease in cancer deaths that offset the numbers. 2020 also saw a decrease in deaths related to chronic lower respiratory diseases, heart disease, suicide, and perinatal conditions.

What do you think about CDC's report? Let us know in the comments.