If you thought Sharknado was just a movie, you’d be wrong.

Swimmers in Myrtle Beach, South Carolina, were in for a treat as they witnessed their very own Sharknado. However, this phenomenon was not caused by a natural disaster—it was all thanks to a very large bird.

On June 22, 2020, beachgoers caught a glimpse of a bird carrying what many believed to be a shark across the beautiful blue sky. Tennessee native Ashley White caught the action live from the 17th floor of a building and shared it on the Tracking Sharks Twitter account for the whole world to see. The video shows a large eagle-like bird flying over the beach with the biggest catch of the day.

Just in case you haven’t seen a bird flying around with a shark that it just plucked out of the ocean... pic.twitter.com/ILKqd9wrFG

The video went viral with over 30 million views and 106,000 retweets. The studio behind the movie Sharknado even tweeted it saying, “How many of you knew a sharknado was coming next?”

Tracking Sharks asked its community of experts to see if they could identify the two creatures and, sorry, guys—it looks like science is about to burst your bubble.

According to expert opinion, the bird was identified as an osprey, and the fish was identified as either an Atlantic Spanish Mackerel or a ladyfish—not a shark. Each of these animals are local to the Myrtle Beach region, making the suggestions very believable.

Ospreys are large birds that live off a fish diet. Most of their prey is between 5 and 15 inches long, meaning they are capable of carrying and eating a small shark. In fact, in 2018, a photographer known as Doc Jon captured an image of an osprey carrying a shark in its talons. And the best part was that the shark the bird was carrying also had another fish in its mouth! 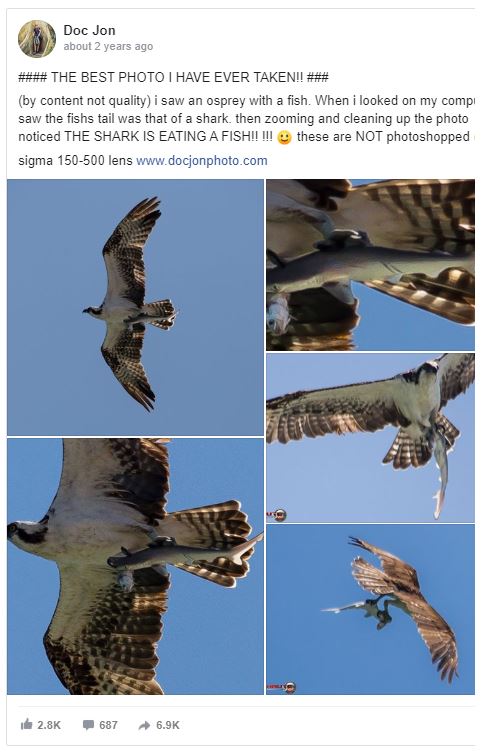 So, what did you think of the video? Would you want to be standing under the osprey when it flew by? Let us know in the comments!