Welcome winter with the longest night of the year and a wonderful light show!

While places all over the country have certainly been a little North Pole-esque in recent weeks (hang in there East Coast!), it wasn't officially the fault of winter.

Monday marks the winter solstice, which generally falls between Dec. 20-23 each year. It's the time that the Earth's North Pole turns away from the sun, causing winter in the Northern Hemisphere and summer in Southern Hemisphere. It brings with it the shortest day and longest night of the whole year. You will only get to see about nine hours, 53 minutes, and 21 seconds of daylight on the solstice, compared to the typical 12 or so hours, says the National Weather Service.

The sun will be at its lowest elevation around noon. The year's shortest day also equates to the longest night, which is great because the skies will be putting on a show. 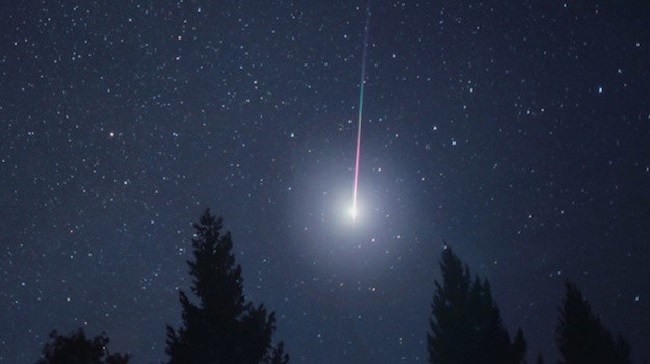 A meteor show and a full moon accompany this year's solstice. The annual Ursids shower is most active December 17-26, peaking overnight on December 21-22. The Ursids shower is one of the weaker showers of the year, but it's no slouch. It will light up the night sky with around five to 10 meteors per hour. Though unexpected, an "outburst" could cause the number to double that, or more.

"In rare instances, bursts of 100 or more meteors per hour have been observed at times over the past century," said Earthsky.org. But it's important to note that it's a rare occurrence; however, maybe this year will surprise us!

"The Ursids have a sharp peak on the morning of Dec. 22, meaning that observers will see many more meteors on that day than on days before or after. Look at the sky in the morning on the 22nd, after midnight and as late as possible before sunrise. The meteor-shower radiant, which the meteors will appear to be flying away from, is near the bowl of the Little Dipper, and the radiant will climb higher in the sky in the pre-dawn hours," says Space.com.

This shower was first recorded in England in 1900. It is the last meteor shower of 2020, and it should be more visible than it has been in the last two years. That is because the final full moon of 2020, the Cold Moon, will not peak until December 29. It will reach top illumination at 10:30 p.m. EST on that day if you are hoping to catch it at its fullest.

"December’s full Moon is most commonly known as the Cold Moon—a Mohawk name that conveys the frigid conditions of this time of year when cold weather truly begins to grip us," said almanac.com. "Other names that allude to the cold and snow include Drift Clearing Moon (Cree), Frost Exploding Trees Moon (Cree), Moon of the Popping Trees (Oglala), Hoar Frost Moon (Cree), Snow Moon (Haida, Cherokee), and Winter Maker Moon  (Western  Abenaki). This full Moon has also been called the Long Night Moon (Mohican), as it rose during the longest nights of the year."

Are you officially ready for winter? Let us know in the comments below.